Stephen Dunn Versus the Cliche 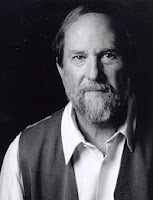 Some days are just are a bother for no reason you can put a pulse to, especially on those days off when there are no plans , leaving you to thrash around the house looking for something to inspire you. Some days are like that , and the lesson might be in the learning how to survive the hours when there are no crisis to defuse, no lives to save, no call to demonstrate your expertise or authority. Steven Dunn has a poem that doesn’t precisely address the condition I vaguely define here, but it did give me a counter point when I came across it yesterday:

And So
Stephen Dunn

And so you call your best friend
who's away, just to hear his voice,
but forget his recording concludes
with "Have a nice day."

"Thank you, but I have other plans,"
you're always tempted to respond,
as an old lady once did, the clerk
in the liquor store unable to laugh.

Always tempted, what a sad
combination of words. And so
you take a walk into the neighborhood,
where the rhododendrons are out
and also some yellowy things

and the lilacs remind you of a song
by Nina Simone. "Where's my love?"
is its refrain. Up near Gravel Hill
two fidgety deer cross the road,
white tails, exactly where

the week before a red fox
made a more confident dash.

Now and then the world rewards,
and so you make your way back
past the careful lawns, the drowsy backyards,
knowing the soul on its own
is helpless, asleep in the hollows
of its rigging, waiting to be stirred.

This has the breezy informality of what Ted Berrigan could do with this remarkable faux sonnets. It's hard thing to pull off , the moment-to-moment progress of someone moving and thinking as they move about a community they know, and even Berrigan was, much of the time, a little too much off beat personality, too little genuine poetry. Dunn is a bit more formal than Berrigan (who's charm lies in his shambling verse), and that bit of reserve brings us a sharper focus as his gaze and thoughts engage. It's a swift stream . What I enjoy about this poem is Dunn's clarity and the ease in which this sequence of images, with the tone modulating ever so from point to point. It's a poem about nothing in particular and things in general, about the things that come into the narrator's field of vision and the memories that are sparked after his failed phone call and his resulting walk through the town he lives in.

I especially liked the Nina Simone citation, since one of my absent minded habits is to start thinking of or even hum a sung a phrase someone else had said had inspired; it's like a private intermission from the affairs of the day. This is a record, also, of the narrator's own thinking, thinking, in this sense, being not an interior essay one fashions as if preparing for debate, but impressions of what's seen conveyed in broad strokes, sketches of the real world one is lost in.

Less argumentative than reflective, with the reflection being refreshingly unprofound yet elegantly modest, it is a poem of someone starting a point of the day in a casual funk who comes to realize that the world in miniature, his suburban (or exurban) locale, is abuzz with others wrapped in their chores, their jobs, their hobbies lest they think too much on the emptiness around them and drive themselves desperately crazy.

Mad Magazine used to do a feature called "Snappy Answers to Stupid Questions", my favorite being a cartoon of a man climbing from a wrecked car he just ran into tree. Some one else walks up the scene ands asks "Have an accident?"

"No thanks, I've already one" responds the bemused victim.

I am tempted more than once daily to get a smart mouth when other citizens in passing give me platitudes, cliches and truisms in conversation, and that, as we know, is a waste of one's energy and wit. What I like about Dunn's poem was that he could turn it into a poem, something larger than the gripe at hand and creates an hypothetical existence that corresponds with the idealized and finalized exactitude a stale phrase or moldy poeticism contains. Beyond that, of course, is the narrator's realization that after his particular bit of snobbery, his perfect response of "No thanks, I have other plans" becomes ironic, effortlessly so in Dunn's straight-forward rhythms and images. It has the odd tinge of self-fulfilling prophecy, and you wonder if the speaker considered another cliche by the end of the poem, the one attributed to Abe Lincoln,"People are only as happy as they make their minds up to be." It's a conumdrum one drifts into while taking a long bus ride or waiting for a table , and it's something one gets out of with a sigh and then pressing on with the agenda that's been plotted. Dunn gets that moment beautifully as well.
at March 06, 2009