I was doing a bit of cleaning up of old computer files yesterday when I came across this fine poem by Peter Campion , posted in March 2004 at Slate by their poetry editor Robert Pinsky. "Poem to Fire" is an alternately sweet and brutal examination of an American dualism that no one's able to resolve, sex and cars.

Peter Campion is a good poet but a dreadfully standard-issue reader, and as always, the tinny recording values offered by Microsoft engineers makes the merely unexceptional become truly awful. Which is too bad for Campion, because this is a good poem that has legs beyond the poet’s near motionless reading?

Near motionless indeed, since this strikes me as about speed, impatience, anticipation, the world whizzing by in a television ad fantasy of a man rushing through traffic, in his home town, lifted on the wings of his desire and lust as he attempts to free him of the ordinary stuff of existence he endures and land him in the presence of the woman that makes the battle with jobs, traffic lights and slow drivers worth it all. Campion conveys a masculine verve that seeks what arouses the male sensibility; the town he rushes through is a blur of details he desires to be past, beyond, liberated from as he vanishes into the v shaped perspective of the road vanishing over the perfect hillside that exists only in the mind's eye.

Fast transparency that explodes the fuel and air

in the cylinder and shuts the intake valves and thrusts

down on the piston so the crankshaft spins and spins


this pull to her could be your own impersonal presence /cloaked in the day to day of the malls and condos /all those wired sensors keeping on guard for you /except you flicker even inside the wet wall /where papillary muscle makes that sweet pulsation in whatever room she's moving through this moment /under the cotton and the cool smoothness tinted blue.


This is a kind of race toward an extinction, a surrounding of all manner of power and control to something greater than the hunter can manage; the poem ends in the suggestion of softness and "cool smoothness", a space of erotic surrender where the armor is doffed, the bullets unloaded, the pent up knots and coiled aggravations of the day released in some fantastic exchange until there is a drift into oblivion where gas pedals and traffic lights matter not at all. It reads best, without Campion's recitation, when you regard this as bittersweet jag of thought where one finalized object of desire colors the surrounding world. This is done wonderfully, the world defined by the reach of one man's looping obsession.


Campion turns an ordinary thought into an extreme language that simulates the frequent fast-forwardings a good many of us power-obsessed sorts are prone too, wherein the world of home, work and community relations can go to a sudden and unexplained hell for all we're concerned because there is a sudden and seeming instinctual need to severe ties and race forward toward that which is most desirous to us. Prohibitions, niceties and protocols are damned, we want what we want when we want, and we've the will and the means to achieve our ends.Male fantasy, perhaps, rarely acted on to the extent I've described because most of us don't fancy jail or losing jobs as acceptable consequences of pursuing a whim, but it is the mind set that Campion details in his abrupt, speedy phrases; in the chase, the world is a blur, details like their defining points and accompanying contexts, and there is a kind of elevated euphoria that arises in the acceleration toward desire.

A sort of drunkenness, I suppose, an urge to burn up what energies there are in one's body and in the world where one lives and to be made in the flash of either a literal or metaphorical flame into a another form of energy; it is the urged to be changed, and in this case it is the eroticism of thinking of the woman he his racing toward, that creature of another kind of power with whom he may merge and dissolve. This is DH Lawrence at fever pitch. Lyricism has more than one kind of music to play along with, but let us also say that music is not always lyrical. I don't think Campion intended sweet sounding passages that might assume to emulate an easily assimilated melody. This is not Sara Vaughn, but rather Charlie Parker. As with Parker's serpentine phrases and crammed choruses, the matter is speed, which Campion gets right, and the attending anticipation that becomes sheer impatience with the world the higher the velocity becomes, or the higher the desire for yet more speed becomes. The poem doesn't sound lyrical to me at all, and the angst isn't in the sort that would make muscle men behind the wheels of Detroit's noisiest engines contemplate their long empty nights at intersections.


The poem works for me because Campion's voice comes from a condition of his narrator's thinking rather than a nuanced response to events that have already happened. It is about the wish for a rapid exit from obstacles, and it is in this instance that he creates his breathless, blurring effect. The physical world is summarized and dismissed while the desired object is enlarged in the expectation. As with all things erotic, the urgency and tension are created in the distance between the two, in that in-between state the narrator desperately wants an immediate exit from. This is much less about the actual race to his lover's house than it is about a mindset that takes control of the nervous system and produces a physiological effect. Our driving hero might well be stuck in a traffic jam on the Interstate for all we know, and that matters little here.

The relationship between the speaker and the woman seems to be suffering from some unspoken fallout, even if it is only physical distance. What falls outside the frame in this case only intensifies my curiosity about the extreme in which the narrator's personality is tilted. It's not important for me to know anything about the woman (if she even exists in this narrator's frustrated thinking jag), only that it's a telling element, a slight detail that convincingly leads up to a fleeting state of mind that Campion isolates particularly well.

Campion is a fine poet, a very good one, and "Lilacs" is a fine bit of elliptical heartache from him. He has a wonderful way, if that's the phrase, at getting nestled between the long deep sighs and low toned moans erupting mid throat. There is so much imaginary agony the narrator suffers here while he inhabits a life that seems 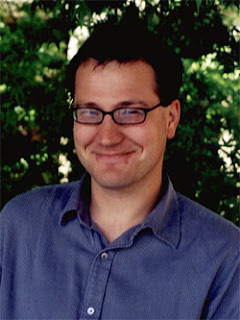 to be working, one wonders what goes on behind those eyes. We've all seen those eyes, on buses, in banks, at parties, when someone is in the middle of a throng of people, in the midst of mad activity, eyes on someone who still strikes you as being alone, lost in thoughts, their eyes cast at some translucent thing in a corner, high or low, rummaging through imaginary boxes filled with their life, looking for a clue as to how they came to be standing among others of whom he or she wants no part of.
It used to burn, especially in spring:
the sense that life was happening elsewhere.

just out of reach. Inside the facing houses
chamber on networked chamber rose … to what?

Some angel chorus flowing around the sun?
Some lurid fuck? ... For years that huge desire

simmered, then somehow ... didn't dissipate
so much as fuse itself to thought and touch.

Not an attractive state to be in, this perpetual state of regret and unexamined expectations, but it is a state of mind nearly epidemic among those for whom poverty isn't a source of their despondency, and for whom scents, sounds, tints of light or billboard slogans are triggers , launching points for them to go asea rudderless amid the ebbs and flows of unconstrained memory. This poem is a small gem, a perfect lyric of a mind trying to reconcile actual choices he's made in partners and occupation and location, with other he might have made, thinks,perhaps, should have made.


Though one would usually be compelled to elaborate too much, too long, too often in exploring this situation--what defies being named encourages the exhaustion of even the best writer efforts to tease a sense of exactness from such a state of perpetual , nebulous limbo--Campion sticks to poetic principle and gives us language that creates a sense of the interior argument. The external world is not banished entirely from his thoughts;rather, they intrude on his reverie, they bring back to his current obligations, duties, his willingness to pretend to be happy inspite of persistent regret.

You stand in purple shade beside your dresser.
And filtering off the park the breeze returns it:

lilac: its astringent sweetness, circling us
as if it were fulfillment of desire.

But not fulfillment. Just the distance here
between us, petaled, stippling to the touch.

Campion, again, writes well about what happens in the cracks between life's cushioning assurances, but he reads dreadfully, and the recording provided us reveals him to sound whiny, sniveling, limp wristed, a reticent and rattled drone of gutless pessimism. The poem is too good to merely be known for a wimpish rendition; even the most self indulgent of regrets should have a residue of rage smouldering, a flame of anger still consuming the last unspent piece of lumber.
at March 12, 2009