Who needs to age gracefully? 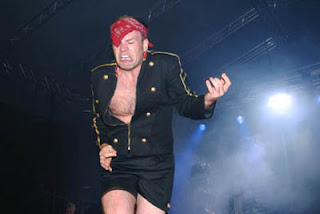 Claude Scales is a thoughtful blogger with a keen ironic sense who quotes New York Times columnist Gail Collins on the issue of boomer aging:

Long, long ago, Mick Jagger used to say that he couldn’t picture singing rock ’n’ roll when he was 40. His message, obviously, was not that the Stones planned to retire, but that Mick planned on remaining in his 30s forever. That which we cannot change, we ignore.

Ah, I hear you. A friend of mine solved his age issue by refusing to have anymore birthdays. It was a funny line at the time, when both of us were still in our mid thirties in 1987, but the last time I saw my friend a year ago I beheld him in latest guise as a high toned, edgy shoe designer for Hollywood stars. He certainly took the part seriously, with his thin designer glasses, body fitting shirts that hugged his weight-machine toned torso and arms like a small glove on a large hand. And then there was his face, which was lined as it ought to be for a man in his fifties; he's a good looking man, to be sure, but the conflict between an untouched face and clothes more appropriate to Euro trash movie villains leaves one scratching their head intensely, at the risk of making the scalp bleed.

Not that I am without vanity; a mirror is sometimes the only friend I have, in that a friend is someone who tells you the truth no matter if you like it or not. The evidence is in; act your age, yes, you've gained weight, those lines around the eyes are yours, friend, enjoy the character they give you.The best I can do is play blues harp in sometime bands with musicians of like age, 39-55, and resist the twitchy urge to mime guitar chords.The generation that listened to big bands had an easier time with their idols aging than we rock and roll boomers have had; jazz musicians stand there and play great music while the rock musicians, in sound and mythos, is predicated on the promise of youth and rebellion, ridiculous things to strive for when the grey hair and creases and body mass gang up on them.

All the same, one has to tip their hat yet again to the Rolling Stones and appreciateaa the fact that whatever the issues of age have been, they've protected their reputation as a working band. They continue to release albums with new material, most of the tracks being surprisingly taut and crisp (even though Mick Jagger's famed jaded ambivalence in the lyric department sounds rather pat these days), they continue to tour , they continue to sound like what rock and roll , in theory, should sound like, angry, ironic, aggressive. We might also add that Jagger and Richards et al sound , in their best recent music, wise but not withered. Like the recently departed master Norman Mailer, they aren't leaving show business without swinging for the fence each time at bat, hitting more long balls than anyone has a right to expect. Might we get some of that energy and inspiration?
at April 13, 2008