Memoirs of an Amnesiac

The estimable James, novelist, poet, and critic, has an opinion on everything having to do with culture and the arts, and with Cultural Amnesia , an alphabetized collection of essays on the artists, poets, musicians, writers and film makers he feels we should be conversant in, lest we forget, get lazy, or simply stop giving a good goddamn of what brilliant men and women are trying to do. James does give a damn, fortunate for us, and sallies forth with learned and nuanced barbs, jibes, praise, and digressions that evince a mind that will not stay in one place long. His range 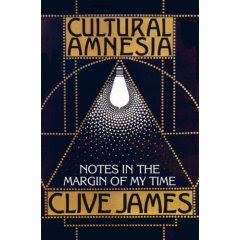 is impressive, though some of his views are questionable, given to subjectively defined absolutes, such as his long essay on jazz composer and band leader Duke Ellington; James does an insightful reading of the master's body of work, but goes beyond his kiln expressing his dislike of the modernism that caught up with jazz improvisation, claiming, in effect, that the faster, more bracing innovations of Charlie Parker, Coltrane and Miles Davis destroyed the form. Rather than admit that any vibrant art changes with the younger stalwarts who take up it's practice, James would rather that his beloved idea of jazz, rhythmic, melodic, and danceable, was "dead". This is rather typical of the book, where one enters what they think is a discussion of an intriguing personality only to find that James has a grievance he wants to address, a score to settle. He goes off topic with the topic he selects.

A mind as expansive as James' seems to be wouldn't make such closed-source claim, and one gets the feeling as they progress through his pieces on painting, film, literature and the like that rather than attempt synthesis with his tastes, he's formed a template on each of his subjects, a prepared statement that he can repeat time and again, on command. Elsewhere, he shows a knack for leaving his ostensible subject altogether to consider a tangent that makes for a mystifying transition; his essay on film director Michael Mann turns into a muddied meditation on terrorism and relative morality of fighting the scourge with clandestine means. It's something worth discussing, I suppose, but one feels cheated at these times in not getting what James promised he'd discuss. There are other subjects one puzzles over, such as his inclusion and other wise bright essay on talk show host Dick Cavett; the issues he takes up in Cultural Amnesia’s alphabetized format is to have readers be confronted with cultural figure who are truly crucial in the advancing (or retardation) in the 20th century, but one wonders whether Cavett, despite his wit and skill as an interviewer, is among those who contributions mattered to the degree that James immortalizes him further. Cavett himself might well be embarrassed by the critic’s lavishing.

A particular annoyance is his habit of showing his rather narrow take on some of the arts he covers, especially in his remarks concerning the respective bodies of work from jazz composer and band leader Duke Ellington and saxophonist John Coltrane.


Typically British and marvelously intelligent, James' goal is not just to inform the uninitiated to new persons and their ideas, but also to provoke a conversation, perhaps controversy among the cognoscenti. He does this effectively on a recent excerpt on Duke Ellington; the essay reads well and describes the composer's particular genius for writing three minute swing masterpieces, not a point of contention. He then takes the dimmer view of Ellington's later work, when he was composing and performing longer concert pieces, a denser, less swinging arrangements of colors and moods. James is not happy with The Duke's efforts:


The ­art form he had done so much to enrich depended, in his view, on its entertainment value. But for the next generation of musicians, the ­art form depended on sounding like art, with entertainment a secondary consideration at best, and at worst a cowardly concession to be avoided. In a few short years, the most talented of the new jazz musicians succeeded in proving that they were deadly serious. Where there had been ease and joy, now there was difficulty and desperation. Scholars of jazz who take a developmental view would like to call the hiatus a transition, but the word the bebop literati used at the time was all too accurate: It was a revolution.

This isn't an unusual position, since critic Gary Giddins has written at length about why he considers Ellington's legacy resting not on denser, mature work in later years, but instead on the sheer wealth of shorter dance tunes he brought to light; all the invention one might wish in notation and sound are found in the work Ellington performed to keep America dancing. Yet Giddins admits the originality and greatness of much of the larger work, while James is harbors a resentment against the post-swing developments of Bebop complexity and post-Bop envelope-tearing improvisation of John Coltrane. Pretty much implying that one of the greatest betrayals against art was that of a younger generation of improvisers seeking ot expand jazz's lexicon, James cites with endearing relish the great Ben Webster's magical tenor work for Ellington against the wild man arrogance of a younger John Coltrane:

There is nothing to be gained by trying to evoke the full, face-­freezing, ­gut-churning hideosity of all the things Coltrane does that Webster doesn't. But there might be some value in pointing out what Coltrane doesn't do that Webster does. Coltrane's instrument is likewise a tenor sax, but there the resemblance ends. In fact, it is only recognizable as a tenor because it can't be a bass or a soprano: It has a tenor's range but nothing of the voice that Hawkins discovered for it and Webster focused and deepened. There is not a phrase that asks to be remembered except as a lesion to the inner ear, and the only purpose of the repetitions is to prove that what might have been charitably dismissed as an accident was actually meant. Shapelessness and incoherence are treated as ideals. Above all, and beyond all, there is no end to it. There is no reason except imminent death for the cacophonous parade to stop. The impressiveness of the feat depends entirely on the air it conveys that the perpetrator has devoted his life to making this discovery: Supreme mastery of technique has led him to this charmless demonstration of what he can do that nobody else can. The likelihood that nobody else would want to is not considered.

Jazz ought to have stood still.

The most noticeable element of this essay is Clive James' resentment that people and things change over time. Eloquent as he is about Ellington's great early period, there is less a convincing argument for the superiority of swing over more experimental strains of jazz than it is a barely contained lament for lost, youthful elan. As has been said already, the rhythms of the world changed after WW2, and the kids were taken with rock and roll's back beat rather than what was going on with jazz. Being able to swing was besides the point; the children of the Ellington era audience wanted to rock. The jubilation at the Ellington "comeback" concert was a good and great thing--good art should always cause excitement--but it didn't translate into the fabled return of the Big Band/Swing era. It's doubtful Ellington himself would have desired a return to the Golden Days, as he was far too interested in the new music he was composing and performing with his Orchestra. For such a bright fellow, Clive James has the queer notion that art, jazz in this instance, must not progress some vague peak of expression; band leaders should keep their writing chops focused on producing limitless three minute dance tunes, and soloists have to remain sweet, lyrical, and brief.

Art is only interesting in that it evolves with successive generations of players, and it would be a strange and stale reading world if novelists adhered to perceived rules from the eighteenth and nineteenth century, or if film makers eschewed sound and color. Jazz would be a predictable shtick rather than a creative act.The truth of this is that audiences were turning away from jazz in general.Dispite whatever historicist arguements advanced pitting traditionalists against experimenters in order to explain jazz's declining audience,both Ellington and Coltrane were both playing to diminished fan bases;the record buying public had gotten younger and leaned towards a simpler rhythm and blues style. This was true among black audiences, whose generational switch to Ray Charles, and Rufus Thomas influenced white audiences, resulting in the eventual rise of rock and roll. Everything gets displaced from the center. Clive James objects to both Ellington's widening ambition with his composing, recording and performance of longer concert pieces and to Coltrane's redefining what jazz improvisation could sound like. He seeks to locate the cause and the instance when jazz ceased being the world's all purpose sound track, and for as sweetly as he writes, seeks to attach blame. He forgets a crucial fact of being alive; things change

James is at his best when he finds the clay feet of cultural icon and then wields a sure hammer to smash some other wise sensitive toes, especially in the case of German Communist playwright Bertolt Brecht. Supported by the government to write his plays and poetry in furtherance of the revolution, James takes delight in detailing the jarring contrast between the man’s image, that as an artist who was “of the people”, and his lifestyle” which, as he describes it, was as bourgeois as any cigar chomping capitalist he might excoriate in his art. Brecht, though, was mindful to keep up appearances; he apparently had the tailor who made his silk shirts manufacture them so that they looked like the rough textured denim that was the requisite dress of proletariat intellectuals. As for Brecht’s art, which was considerable and deserving of analysis on it’s own terms, James skirts the issue altogether with summary dismissals worthy of Paul Johnson (Intellectuals) and dwells on the gossip, the dirt. In that regard, Cultural Amnesia is deep dish indeed.
at February 01, 2008