It's an ideal situation for poets to interpret a painter's world, especially those artists who are both figurative and have content which implies a relationship between the objects and people on the campus, a suggestion of narrative complexity.The basic problem to overcome, though, is finding the equivalent tone and language that relays a strong sense of the visual style , which suggests the narrative thread. I've written of few poems after artist's work, not that any of them have been successful in any terms I'd lay out, but these efforts have been a interesting practice of jumping over the tropes you might normally rely on and instead develop 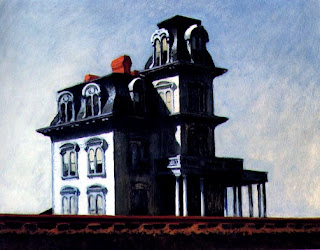 a new rhetoric. Staying with a style one knows when attempting to get inside another man's art can result in a poem that reads more like product, as I noticed in a poem I came across recently, "Edward Hopper and the House by the Railroad" by Edward Hirsch.Normally I like Edward Hirsch a good deal, but this attempt to unearth the hidden essence of Edward Hopper's ideally isolated landscapes makes me think that it is a tad overwritten. The details seem entirely ready made:

This man will paint other abandoned mansions,
And faded cafeteria windows, and poorly lettered
Storefronts on the edges of small towns.
Always they will have this same expression,

The utterly naked look of someone
Being stared at, someone American and gawky.
Someone who is about to be left alone
Again, and can no longer stand it.

Artifacts from the prop department.This reads more like scene descriptions one finds in parenthesis in a film script's early draft. The camera lingers on the badly lettered sign, the camera pans the closed storefronts, the camera pulls back to a vista that reveals the town in bas relief against a mountain range, with houses
huddled in tight clusters that encircle the center of town. It is rather dramatic, visual, and effective , if one were watching a movie film made from our supposed script.

But we aren't, and Hirsch's descriptions more instructive than revealing. Hopper's advantage is that he could suggest relations between his human figures to one another and to their surroundings with his magnificently broad strokes and his blurred, subdued tones and yet maintain the essential isolation of each element on his canvas; his contexts are subverted by the existential singularity his streets, sunlight, his characters are all shown to be locked in. The effect is visceral, one gets his mood in a rush, and one garners more perception the more they study his best paintings.

The narrative, of course, is implied, and this is where Hirsch's poem becomes mannered, in the attempt to do what Hopper achieves by describing the elements, suggesting the rather obvious relations between them . and back peddling to conclude, finally, that the American malaise is totalizing estrangement.
It's a poem full of tricks and moves, and it makes one wish
for a more plain spoken, less qualified tone poem.
at November 29, 2007