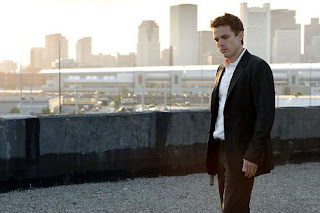 Had a chance to see Gone Baby Gone during a break from all the turkey feasting, and it bodes well for the revival Ben Affleck film career . His comeback film, Hollywoodland, which had him starring as the late actor George Reeves who played Superman in the Fifties tv show, was merely okay, the sort of small film project other stars like Bruce Willis (Pulp Fiction) and Sylvester Stallone (Copland)have used to rebound.

The effort didn't hurt Affleck's reputation , perhaps enhancing his credibility as someone who is "about the work" and therefore reliable, but his performance in that unfocused bio-pic was , I thought, stiff as a cardboard suitcase. Blame the script, perhaps, but I couldn't get beyond Affleck's jawline, lantern and making his smiles seem like smug, tight little smirks. Which is too bad, since I understand from current press that Affleck is one decent guy.

Good for him that he latched onto a good script with his directorial debut Gone BabyGone, starring his brother Casey Affleck.Based on the novel by Dennis Lehane (who also wrote Mystic River), this is a straight forward, dark-skied mystery set in Boston where the junior Affleck's character, a private detective specializing in missing persons working out of his apartment, is hired to "augment" the police investigation in a child kidnapping case by talking to neighborhood characters who won't talk to the police. Straight ahead, moody, paced briskly considering the film's length and the number of complications, Gone Baby Gone is a sturdy and respectable effort, unpretentious and never false to Lehaine's cut-rate prose descriptions of older Boston enclaves and foreboding weather, and he allows characters to establish their rationalizations.

And it's a pleasant surprise to see a good actor like Morgan Freeman in a good movie for once. Casey Affleck, very fine as Robert Ford in the recent western The Assassination of Jessie James by the Coward Robert Ford, where we see his character's fan boy adulation of the famed robber slowly evolve into a murdering paranoia, is equally adept here, conveying a detective still in the process of developing a personal ethics as he weighs the arguments from parents, hardened cops and a girl friend about what constitutes the right thing to do. Affleck's detective here is someone making his way through a pragmatic world where everyone argues that what they do is for the greater good, and he's a man who finds himself adhering to a moral code regardless of the consequences. This becomes a bit talky , you can imagine, but the verbal jousts between he and Ed Harris and Morgan Freeman are wonderful things to observe, that rare thing, actors with dialogue exchanging practical philosophies.
at November 23, 2007