Shaving "Against the Grain" 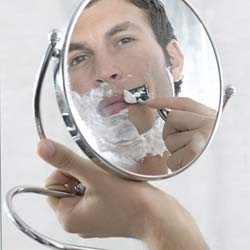 The problem with private laments made public is that too often the concealed sadness and the mixed feelings remain private, the difference being that there is now an audience that needs to puzzle out the encrypted melancholy and inside jokes."Against the Grain", this week's poem in Slate, is one those pieces where the language isn't enough to empathize with. This is the experience of walking into a room you thought was empty only to find someone already inside, talking to themselves, eyes staring to a distant spot.

This irreconcilably subdivided poem spends a lot of time muddying the distinctions between things being dragged and those creatures that do the dragging, and author Genwanter adds to this patchy mess pale Latin quotes and the creased, leathery visages of Freud and Jung to confuse things all the more. Given the dedication of the poem to Joy Young, Genwanter's wife from what I understand, "Against the Grain" is an agonizingly ambivalent love letter, conveniently wrapped up with the mock-question toward the end as to whether he may address her as "Freud Jung"; there are cross currents here Genwanter isn't able to navigate; this poem quickly locates the nearest sink hole and allow the sheer weight of it's un-mortared allusions take it down into the ground, pass the gas pipes and the water mains.

This is an act T.S.Eliot has already mastered and performed to perfection, succeeding due, most of all, because Eliot was a phrase maker, a polisher of potent lines. For all the fragmented allusions and elusive centers his poems contain, the poet was quotable, memorable, which makes the task of pouring over and debating his poems a joy; there is in Eliot the instinct that informed him that while he was purposefully not making sense in his work, IE, getting to a fine honed point, he was still required to write well enough to create a sense of the psychic states and subtle desolation he felt. One walks away from Eliot's work not knowing what he meant, perhaps, but one certainly grasped the less obvious nuances of how he felt. Genwanter isn't quotable here, he isn't even clever, and he's unable to get the balance between the self-mocking and the dead earnestness that could have made this a workable pastiche; it reads as if he tossed his papers on the lawn and pieced them back together willy nilly after running over the pages several times with a lawn mower. This barely deserves the word pastiche, which implies a skilled blend of disparate elements; this is more like newspaper clippings, snapshots and shreds of pages torn from classics and diaries, bulging, frayed and clipped together with a twisted paper clip .
at October 10, 2007