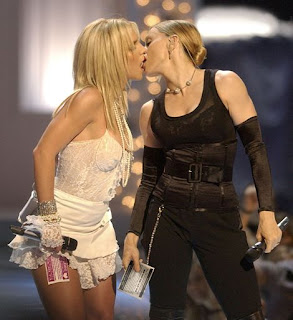 Britney Spears' performance at the most recent MTV Video Awards was, by consensus, an unmitigated disaster; she appears to have gone on to the stage the way George W.Bush went into Irag, ie, unprepared, unrepentent and delusional in the thinking that he/she had the slimmest idea of what they were doing. She was bad, of course,but the worst sin for some the numbskull gossiptistas was that was fat, a real pig, trailer trash smoking Kools by the BBQ. Well, c'mon now, let's dial it down.She wasn't fat, but she is not in the shape she needs to be in to pull off the kind of act she attempted to. Madonna, foundational diva from whom Spears and others learned their trade in sexpot kitsch, maintained herself even in her long periods off the road. Think of it what you will, but she had the body to justify the occasionally scarce clothing.

It's also worth noting Madonna continually changed her musical and visual style; even as she got older in a market that's unkind to middle aged women pop stars, she kept people interested in what she was up to. I don't especially like her work(too much surface, too little worrisome things that might make it all the more interesting), but I do respect her work ethic and the energy spent to keep matters interesting. Britney's basic mistake was to try to go with an act she had nearly a half decade ago, when she was buffed, just out of her teens, and could pull off the sleaze factor, at least up to the standard such cheesy entertainment requires.

She is not fat at all, but she is soft, sexy for a new mom, but not sexy as every male teen horndog's pin up girl. It was sad to witness, and I felt embarrassed for her. And she was wobbly, with more than her attention distracted. There's an unhealthy trend in celebrity bashing currently, with remarks aimed toward Spears by allegedly reputable media sources being mean, just plain mean. But the poor woman's showing up to a comeback gig in the shape she was didn't help her cause.
at September 15, 2007