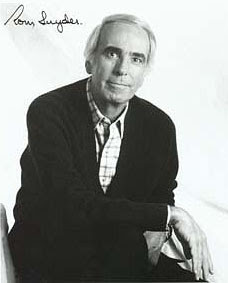 I was sorry to read that Tom Snyder, maverick and generously egocentric talk show host for NBC in the seventies with his late night Tomorrow Show program, has died of leukemia at age 71. In the same period it was the hipper choice to prefer Dick Cavett's brand of chatter with writers like Mailer, Vidal and Kingsley Amis, but there was something controlled about Cavett's manner that was at once appealing and off putting. You wanted him to get steamed when a rude or inane guest was getting on his nerves, but he didn't, falling silent for a moment instead and adding a fast quip or witticism to defuse the tension. Snyder, on the other hand, was all gusto, having something of a Marine attitude in a conversation that made him charge forward with a barrage of questions towards a guest whose work or notoriety our late host seemed positively clueless about. In a constant grey ribboned haze of cigarette smoke, he'd bluster, laugh, wave his arms, slip into rather pointless anecdotes about small TV or radio stations he used to work (complete with suggestions about what bistro served up the best steak, and the like) and ask questions that at times seemed to mystify his guests. Best of all, Snyder often blew his cool. Actually, he never tried to be cool, as MacLuhan's dictum of what a "cool medium" demands of a personality. Snyder was hot, hot tempered, hot blooded, a loose cannon. One of my favorite television memories during college was his attempt to interview Johnny Rotten of the Sex Pistols; Snyder would field some questions, seeking some information on which to base the rest of the interview. Rotten, noted malcontent and general purpose Antichrist, rebuffed Snyder again and again with a host of Anglophone vulgarities. Snyder in turn fumed and told Rotten as much, with the result being an effective deconstruction of the talk show format. Johnny Rotten refused to play along, and Tom Snyder refused to pretend that nothing was wrong. Good show, Tom. Fire up a colortini for me.
at July 30, 2007