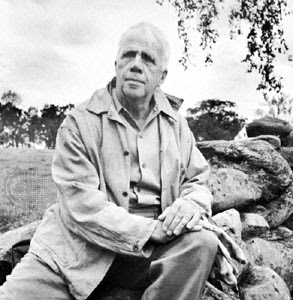 Robert Frost is better than Edgar Guest, I suppose. But he drives me crazy with all these slant rhymes and pastoral silences. I wish he could make me think that there was something horrible going on over that hill, in that cabin covered in the snow, in that grove of trees, by that still lake highlighted by moonlight. But he doesn't, and too bad. This is a world of someone who doesn't need the company of others,and that, frankly, is so quaint it's insufferable.There are those who will rightly protest the unfairness of my dismissal of this revered poet and correctly point out that are poems he's written that are darker, more complex than the winter and fall landscapes I characterize his verse as. But it's to no avail.

All the same, I just never cared for Frost's brittle diction and solitary pluming of his darker side; if there was something horrible going on behind the shrewdly arranged stillness of his poems, and if that something were in his house, then it was all in his head. I thought it was corny and contrived and airless when the nuns had us all parse his efforts and then write papers on the constant presence of death that pulses under the surface of his unadorned lines, but even at that age I distrusted the writers' persona. Bitter, depressed and solitary he might have been, but there also seemed to something machine-made about his poems; it was an easy style for the larger public to like and for the critics to praise and extol upon without seeming like they're blurbing merely for the sake of being quoted. The result, in my next to worthless opinion on the matter, is a poet who is over rated, over praised, over anthologized. I have never cared for the old boy's brand of grumpiness, and I never will.
at July 29, 2007