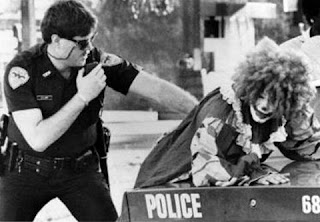 Showing John Wayne films to Viet Nam GIs in an effort to shore up their patriotic zeal and to remind them what their fight is all about is straight out of Heller, Pynchon, and Baudrillard. Viet Nam will always be a horrible fact of history, but you have to find this instance perversely comic: telling real life soldiers that they have to live up to a living military heritage by illustrating the point with fictional renderings with oversized heroics is the perfect post-modern conundrum. The instruction of history, with names, dates, battles, and analysis of particular conditions, is no longer sufficient to make the past useable in the current moment, so... LET'S SHOW THEM MOVIES!

Did WWII soldiers who saw Ronald Reagan movies think that they were really swell?
The audience the Reagan war movies were intended for, the American population still at home thought they were the living end. There was an accurate assessment that the home front needed reassurances that the unexplainable events in Europe were part of some Great and Good Cause, and that our involvement was part of an effort to save everything that is decent and worthy in human history: what better way to make this argument than in an endless series of film reels, where complex historical forces are reduced to simple-yet-compelling story arcs that outlined current events as a matter of good-guys vs. bad guys? It's not as if this was a wrong thing to do, it's just that the idea of soldiers watching films insisting that the battles they're actually in are worth winning produces a wild sense of disconnection: anyone would imagine that the soldiers were already aware of the worthiness of winning the war: their lives depended on it, period.

I don't think the GI's in either the Pacific or European Theatres had the time, or the desire to watch Hollywood movies that were marked for the domestic market, but it is my guess that had the soldiers the option of watching their idealized counterparts, the reaction would be no less derisive, hooting, sarcastic. The irony of the initial post about the Viet Nam showing of Wayne films was the bone-headed notion that old, dated, and thinly valorized characters, rickety as stage props and plainly intended for an civilian audience that needed convincing that life must go on --that is, capitalism must go on-- during a good and just war might in some insane way spark a blaze of militant patriotism in actual soldiers involved, daily in actual carnage, death, destruction. In either case, real or supposed, the effect is perversely comic, and I can only imagine the laughter is a species of gallows humor: it's evidence of a knowledge that language, or its abstracted uses in narrative mediums, can come close to conveying.

Did Derrida and Barthes actually "define", or address at all the rather slippery notion of "post modernism"? Seems more appropriate to say that they, in their respective inquiries, high lighted some real conceptual issues in Continental philosophy, and created another layer of jargon that made an industry out of what, in retrospect, seems a small addition to our ways of thinking about writing. Both were inspirations to a generation of literary critics who wanted some Gallic gravitas in their corner so they may speak philosophically with out actually philosophers--or so they may extend their embedded existentialism with into the world with a bright and shiny new paint job--but my reading of them didn't come across the word "post modern".

Writing and literature is all veils, I would think: if anyone could get "IT" with a piece of work, we would have to assume the writer, and his audience are satisfied, sated, and are disinclined to hear the story again. But there is always another wrinkle to relate, another nuance to discover, another veil to be taken away.

We find, with reading, that writers we care about themselves could care less about what kind they are supposed to be, according to literary archivists; thus, they will have stylistics extremes that venture into another camp, away from what common knowledge dictates is their "native" style, manner. Is Gravity's Rainbow any less a work of "Magical Realism" than what we've seen in Garcia Marquez or Borges? Is Nabokov's work Pale Fire less post modern than, say, Mulligan Stew? It becomes the definitively moot point, irresolvable and subjects to an unending detour the circles around the precise meaning of finally inconsequential terms. Imagination is trait that will use anything manner or style that is suitable to a writer's project at hand and it ought not be surprising, or upsetting that many writers, assigned to roles by career-making PhD candidates, simply do what they need to do in order to get the work done.

This gives us fascinating paradoxes: Norman Mailer, by temperament a romantic existentialist who might have been in the late 19th century, is one who took to post-modern strategies to render is work: the range of his assumed styles and experimentation creates specific problems with literary historians who might be eager to be done with his books and his name.
at July 01, 2007