Black Out in New Jersey: The Sopranos Finale. 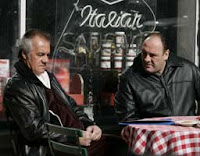 Bobby, Tony Soprano's brother in law, commented about the fabled bullet coming at you that maybe a guy wouldn't even here it coming. And now here we are, at the end of the Sopranos final episode, seeing Tony look up from a restaurant table where his entire family is seated, eating onion rings, and we're suddenly dumbfounded when the screen goes black and the credits roll after long seconds have ticked by. Did Tony see his daughter Meadow coming through the door, or was it something truly awful? Whatever you think, this is a finale we'll be debating for years.One of the things David Chase and his writers were good at was doing something that went against anyone's expectations; I like the cat too, and I loved the fact that the kitty was staring at Christopher's picture and later showed up outside the pork shop while Paulie sunned himself. I don't know if it could have ended any other way, since anything they did would have pissed fans off. How can you end a show that's been this amazing? So we're left in the lurch, wondering if Tony looked up to see his daughter coming through the door or if he saw a glimpse of a hood with a gun aiming straight to the middle of the head. Either way, it's an amazing send off of a fictional family into the netherland of endless reruns.
at June 11, 2007

Email ThisBlogThis!Share to TwitterShare to FacebookShare to Pinterest
Labels: Sopranos