Writing well is the best revenge 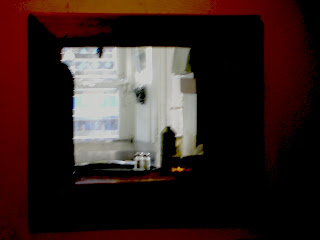 I've no use for care-and-share poetry myself, and have made myself obnoxious in these parts for voicing the opinion more than once. I don't think, however, it's useful or even correct to assume that most people people you meet "... live in a sort of daze, content to live empty and meaningless lives."

There was a time when I thought living intensely and passionately was goal number one and that all else would just have to go by the sidelines while I fulfilled the requirements of my holy assignation, but finally, surviving the deaths of intimates, getting fired from jobs, sobering up, and cleaning up wholesale wreckage humbled me somewhat. Living at the edge of experience was over rated, I came to believe, and more often than not inspired a kind of redundantly exclamatory writing about awakening the senses, or an equally repetitive series of morose dwellings on addictions, tragic pasts, unending sadness. Glaring exhibitionism and constant melancholy didn't seem a desirable way to conduct my affairs, and certainly, in retrospect, made the poetry I was writing at the time, during the seventies and through the mid eighties, incoherent, choppy, self-pitying. The normal life, whatever that was, became more attractive, if only that I needed a relief from the burden of self and wanted to get involved in those matters that just baffled the shit out of me. Over time I found that there was an endless variety of life's condition in between the limited extremes I first held as constant and non-negotiable. What I found was that there were people among the dullards, the pretentious, pompous and just plain phony who had very interesting lives, who were doing good and creative things in their world, who had a nuanced view on what life had them. They were having infinitely more interesting experiences than I was as a gloomy Gus. The onus was on me, the poet, to "wake up" and become a witness to what was actually out there, beyond my opinions and set pieces.

It's presumptuous to assume that you have an accurate read on the inner life of each and every person you meet during the day, and it's best to back off this kind of thinking. It gets in the way of your ability to be a witness to experience.The poets I like have to be good writers, first and foremost, no matter what their work looks like on the page. There are many writers whose works are stunning to look at as a kind of typographical art, but reading them winds up being an insufferable experience, unpleasant not so much because the poems are difficult but because the writing is just plain awful, being either willfully obscure to disguise a lack of real feeling toward their experience, or, most typically , for exhibiting an inane, unoriginal and cliché choked sensibility that would never have gotten out of a junior college poetry workshop.In either case, the visual look of a poem is a distraction from the mediocrity of the piece being read. Good writing always matters, and there are many, many wonderful poets whose works have an originality achieved through a mastery of language that fortunately leads us away from the nagging dread that a tactless and unschooled savant garde has completely overtaken the conversation.Good poets must be concerned with language,I think, since that is the stock and trade of the art. Language made fresh, reinvigorated, reinvented-- I have no arguments with anyone who earnestly attempts to make language convey experience, ideas, emotion, or even the lack of emotion, in ways and with techniques that keeps poetry and poetic language relevant to the contemporary world, the one that's currently lived in, but there is a tendency for a good many young poets , fresh from writing programs, to repeat the least interesting ideas and execution of their professors and to make their work obsess about language itself, as a subject.The concern, boiled down crudely, is that language is exhausted in its ability to express something fresh from a Imperialist/patriarchal/racist/individualist perspective, and the only thing that earnest writers can do is to foreground language as their subject matter and investigate the ways in which proscribed rhetoric has seduced us and made our work only reinforce the machinery that enslaves us. This kind of stuff appeals to the idealist who hasn't had enough living, not enough bad luck, not enough frustration or joy to really have anything to write about, in large part (an grotesque generalization, I know), and it's easy for someone to eschew the work of absorbing good poetry -- Shakespeare, Stevens, Whitman, Milton, Blake, O'Hara-- or learning something of the craft and instead poise their work in non sequiters , fragments, clichés, sparsely buttressed inanities, framed , usually, in typographical eccentricities that are supposed to make us aware of the horrific truth of language's ability to enslave us to perceptions that serve capitalist and like minded pigs.More often, this sort of meta-poetry, this experimental notion that makes a grinding self-reflexivity the point of the work, reveals laziness and sloth and basic ignorance of the notion of inspiration-- the moment when one's perceptions and one's techniques merge and result in some lines, some honest work that cuts through the static thinking and makes us see the world in way we hadn't before.I speak, of course, of only a certain kind of avant garde; one I endured in college and have since survived when I found my own voice and began to write what I think is an honest poetry. With any luck, some of these writers will stop insisting on trying to be smarter and more sensitive than their readership and begin to write something that comes to resemble a real poetry that's fresh and alluring for its lack of airs. Others might do us a favor and get real jobs. Others, I think, will continue to be professional poets as long as there is grant money to be had, and will continue in their own destruction of forest land.
at May 13, 2007