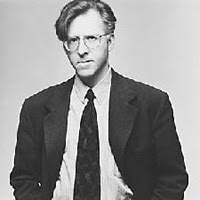 David Lehman’s poem “November 18”, from his collection Evening News, was the subject of a dispute among some fellow poetry readers, half of whom liked the poet’s disjointed connections, and others who thought the poem was dated because of a seeming lack of unity and the use of the names of dead American musicians The conversation became rather steamy. All the same, the poem is hardly dated. Leham writes as though he's a radio recieving transmissions from across the decades, playing the music and the voices on bandwidths that bleed together. This is channeling indeed; what makes the poem enjoyable is Lehman's playful into a single communication, a voice ramped up to talk about several pleasures at the same time. The intrigue is not just makes into the excited stanza, but also those things that are left out, the segues and tranistions that are this speaker's connecting tissue. That tissue, I suspect, would make a poem as intriguing as this ode to hastily discoursed artistry.

Because it mentions people, places and things that are equated with the '50's? An arbitrary habit of thinking, I think. Lehman essentially creates a medley of voices, different streams of language that melt into one another, and with he balances the texture of associations the references bring; this is very much in the modernist mode, especially as practiced by The New York School, who, through the work of O'Hara and Ron Padgett, made a city poetry from an every day language of the noise of the city, it's billboards, magazine stands, grand hotels, loud radios and sports extravaganzas.

It's Johnny Mercer's birthday
from Natchez to Mobile
in the cool cool cool of the evening
very cool with Barbara Lee
singing Marian McPartland playing
the greatest revenge songs of all time
hooray and hallelujah
you had it comin' to ya
and a bottle of Rodenbach
Alexander red ale from Belgium
with cherries and "Tangerine" in
the background in Double Indemnity
he had a feel for the lingo, "Jeepers Creepers"
as Bing Crosby sang it on my birthday
in 1956 I just played it three straight times
and an all-American sense of humor what does
Jonah say in the belly of the whale he says man
we better accentuate the positive that's it
happy birthday and thanks for the cheer
I hope you didn't mind my bending your ear

Lehman lays claim to to a particularly American sound here, starting with Whitman's barbaric yawp, coming up through William Carlos Williams, and finding itself resting next to other high art forms that found much to use, exploit and find glory in from popular culture. It had been mentioned that Langston Hughes did this sort of thing” infinitely better”, but that’s an assertion meant to distract. Hughes never did anything remotely like what Lehman succeeds in doing here, I'm afraid. He sought a blues cadence, a gospel resonance, and a voice based on an idealized African American idiom, but what his brilliance is a separate set of accomplishments. They are simpatico on a number of points, but to weigh over the other on the merits of a fictitious objective standard is spurious.The terrains are different -- Hughes rural and black, Lehman white and urban -- and the motivations behind the experiments vary dramatically. Lehman is an inspired heir to the mood and tact of the New York poets, and what he is able to do he does cogently, with humor and a genuine love of making language behave in ways that are poetic for the sheer ingenuity that cogent barbarism can bring.

Hughes was quite a different case. the poem can't make up it's mind as to whether it wants to be urban jazz or rural blues. The poem is about, among other things, the thriving, buzzing, and churning diversity of noise and music and tempos that one finds spread out across the American landscape, and what happens is a nice medley of musical emulations. If you've driven across country with the radio on all the way, you'll have an idea what the poem manages, the layering of music, voices, references all on top of one another, some fading to the background, others picking up as you near the transmitters, everyone in competition to be heard on the limited band width. You pick up this curious, adventurous, experimental verve in his brilliant music. Lehman is in much the same grain grain, an artist filling up the space of the American Vastness.

Belgian ale? Why not Belgian Ale? We have choices in this Big Country, and the use of this sort of potable enhances that ours is a place comprised of ideas from many other places. It's a nice, fleeting detail that emphasizes the idea of constant surprise. Is it fun? Big fun. It may be to people familiar with Johnny Mercer and his lyrics. That's millions of people, so I don't think you can accuse Lehman of obscurantist tendencies. One needn't know classical Greek to read "The Waste Land". It's the language and the tone that carries you through to the feeling that's being created. A poem ought not mean but be. Now it's a tired old baby-boomer of a poem . This is a poem where the speaker is happy to be alive, is happy for the life he's had, and demonstrates an eagerness for what is yet to come. Lehman concisely, entertainingly and skillfully has written a poem that tells us to enjoy this noisy existence while we may, because the time we have is finite.

Natchez to Mobile certainly gives us a rich slice, but few would say that it's a particularly urban slice,the poem is about creating a feeling of the vastness of America , and also the sorts of loud and hopped up sounds that are made up to fill up what is largely space between the coastlies; part of the way you create that feeling is with place names, time honored and effective. One has the feeling of pointing at a map, seeing an odd sounding name that has native-sounding exotica, and telling your traveling companion "let's go there." It's texture, and it adds this pieces city/country/city layout. This is a poem with names that travel well through the decades; they travel far better than Pound's name dropping of long deceased Chinese poets lyricism in any guise that effectively makes a reader forgo reason and engage emotional, more "felt" associations from what the language highlights cannot be said to be antiquated; it is always timeless. This poem is perfectly comprehensible to anyone who cares to read it with open ears.

Mercer is the starting point, but the poem moves on, along the roads, through the towns, the meals, the intriguing place names. Lehman addresses Mercer's lyrical, vagabond spirit. In doing so, the poem, like travel itself, moves from where it starts, and becomes about something much larger, and harder to define. Final definition is impossible, more than likely, but what we have is the realization of one of my favorite clichés, it's about the journey, not the destination.
at August 03, 2008