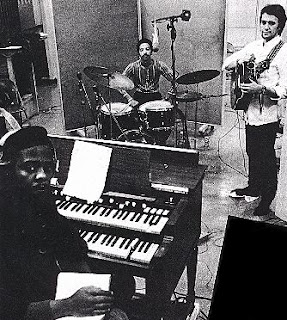 Dedicated to the memory of Malcolm X, this is a roll up the sleeves and get to work album: the playing is all over the map, from Ellington like swing, deep seething blues to hard blowing "outplaying" that winds a nice loop throughout, characterized by the staggering effortlessness of Murray's playing. He will crowd his choruses mightily, and push his tone and his lines to the point where they break, but returns to the blues, landing mournfully, finally, beautifully. Ravi Coltrane on the second tenor is an inspired match--he is more reserved, a subtler phrase, not wild at all, but with full tone control, and wit to spare.

Saw these four women on CBS Sunday Morning a year or so ago, and their bringing their classical training to bear on jazz was a quirky notion that works genuinely well. Name it and the style is here, Kansas City blues to some very "out" moments and some blues to spare, with the ensemble not seeming to try to preserve the dusty air of the chamber, nor falsely infuse their work with a creaking notion of swing. It swings nicely at that, and a bonus is a left field arrangement of "I Feel Good". It's glorious to hear James Brown in long hair circumstances.

Not the guitar show off album one might have thought, but rather a grungy funk hip-hop acid groove fest, with Don Byron on reeds coloring the hard rock salvos of Reid's guitar work. This disc twists in a dozen directions.

An album that's more interesting to read than listen to, I'm afraid: much too much of this is light, redundant pop stylings that sap power from Iggy's delivery. The version of 'Shakin All Over' rattles the teeth rather nicely, but overall, this album seems misguided, a mistaken idea to market Iggy into Real Legend, the Last Rock and Roll Survivor Who Matters. He may well be, but this kind of self-consciousness doesn't wear well with the Ig. That is not where his genius lies. Ig has to rock rough and hard, with those clipped couplets and first-lesson guitar chords slicing up the music of history in ways that remind you that wit is a survival instinct. He can do it, as his fellow Motor City brethren Wayne Kramer, former MC-5, does on albums like The Hard Stuff and Citizen Wayne. We don't need Iggy to become the American Peter Townsend, forever flummoxed by the irony that he didn't die before he got old.

Recorded in NYC in 1968, this is a bracing and varied set, with the musicians exploiting the broadest range of their ability. Ornette style free playing, swinging waltz times, long and layered improvisations are the highlight. Bernie Maupin shines with his sax work, DeJohnette keeps all the factions talking to one another, and Corea leads the session with significant aplomb. Recommended.

The word "pretentious" comes to mind, as well as "waste", in so much as Corea, one of the surest and most ingenious musician/composer talents alive, takes one of his most perfect compositions, "Spain" and elongates into a series of "movements", no doubt meant to explore new ideas, poetry, impressions. What he has here is near unrecognizable from the original, except when the orchestra kicks in with some obligatory figures: the improvisations from Corea and the worthy members of Origin are tentative at best--they sound like they are sitting next to insane wrestlers on a crowded bus-- and the piece, long, shall we say, stops and goes with no real dynamic emphasis or emotional wallop delivered, or even hinted at in the foreshadowing. Corea ought to know better; he can certainly do better.

A 1964 session, sweetness and light meet fire and deep-seated anxiety in seeming alternating breaths. Shorter is thoughtful, probing the moods of his ingeniously laid-out material with finesse that hints at more expressionistic playing to come--his tone always struck me as inner-directed--while the band delivers everything their names promise. Elvin Jones continues to convince that he is the greatest drummer in jazz history.

Superb hard rock and shred guitar rock, crisscrossed with hip-hop and Colemanesque cadences, though Singer Corey Glover's pleading soul-isms are sometimes thin and, frankly, whiney. Still, Vernon Reid is a seriously under-discussed guitar genius, I think, and here demonstrates an ability to execute his solos at wind-burn speeds that never fall into the ejaculating cliches that have stymied the art.
And their topicality is uncommonly pithy--short, to the point, like a well phrased daily political column. So far as that goes, the lyrics had the economy of a well-oiled slogan.

Fleet and easy treatments of standards, or new material composed "in the tradition", all of which highlights Stern's high-velocity lyricism. A 50's Miles mood prevails--Randy Brecker's trumpet work is achingly cool, restrained, a nice change for the fiery blower-- and Stern allows himself a lot of ground to cover, fill, do what he wants with. But you do wish he'd let go of the electronics and just play it straight, if only for our benefit. If it's good enough for Metheney, he can it a try.

Tribute albums are usually overly polite in their treatment of their musical subject, but this one burns mightily. Roney in the trumpet position has a fine, aggressive style, and the efforts of the others are in full swing, force and at the top of their game. It is always amazing to re-discover what a supreme pianist Hancock can be, and the sheer genius of Williams on drums makes you angry that he ever wasted his gifts on the bulk of his fusion efforts. His early death stilled an amazing, revolutionary musician. Wayne Shorter, of course, is all over the place, pushing his broad sweeps over melodies that crackle with electricity
at May 15, 2007