Saw Road to Perdition and witnessed what turned out to be a significant disappointment. Director Sam Mendes seems to have spent an inordinate amount of time, energy and resources mounting the film and not enough time directing it. It has a an interesting look, particularly with its' near monochromatic hues and lighting that suggests the eye of a Dutch master, but this wears thin quickly as the the plot and characterization fails to develop at either a credible pace or with interesting results. There is nothing especially awful here, just stuff that is predictable , an offense made worse by sheer lethargy. H 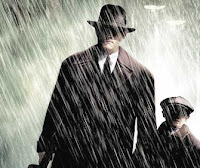 anks does little more than grimace, Paul Newman, performing well in the first part of the film, has little to do afterwards except sit and stare into his lap with an old man's regret. Stanley Tucci and Jennifer Jason Leigh may as well be furniture here. Not the best crime drama since "Godfather". Missing in this artfully mounted yet oddly inert diorama is the script that made the difference with Mendess' previous effort, American Beauty. The plot here is adequate, I suppose, for the purposes of the graphic novel it's adapted from, but on screen, as is, the storyline is little more than a thin, cracking mortar between the cut stones of a huge mansion, ornate and impressive at first view, but revealing a crumbling structure the closer one gets
into it.

In the same sitting--a long sitting--I also caught up with Changing Lanes, thought it was a decent enough Hollywood "message" film, though it had the dopiest premise imaginable. It's not that I object to happy endings -- in this case, each of the characters played by Sam Jackson and Ben Affleck realize the exact nature of their wrongs and wind up doing the right thing by the world and themselves -- it's that I want the fictional solutions to seem fictionally plausible. The concentration of the events into one day snaps credulity, and while you're wondering whether this is an alternative universe where there are 76 hours to a day, the film drags way too much in key areas. Jackson and Affleck are both quite good here, but in the crush of the events that are eating our protagonists up, there is too much reflection, too much self examination, too much fortuitous circumstance for the characters to redeem themselves. Irony is fine, but Affleck's pragmatic do-gooding at the end is too much of stretch, theatrical without being dramatic. Like the film as a whole.
at May 20, 2007