A young painter who is given to creating huge canvases blessed with sub-Cubist line drawings somewhat highlighted with fading coloration that suggest a cross between Robert Motherwell and an anemic Peter Max opined, over drinks, that democracies are anti-art. Where this came from I don’t know, as I wasn’t in her conversation, but it is a topic that I thought about for about an hour, on the way home, my head alive with half-formed ideas needing a keyboard for elaboration. This is among the benefits (or curses) of not drinking, you tend to remember every idea that comes to you. I thought, regarding the comment from our young abstractionist, that the matter of democracies being “anti-art” is less that democracies are anti-artistic than they are resistant to the notion that aesthetic concerns and artistic expression are reserved for a cultivated elite. Democracy rejects this sublimated priesthood on principle, and opens the arena, the galleries so that more who wish to do so may engage in the intuitive/artistic process and keep the activity alive in ways that are new and precisely relevant to the time--this is the only way that the past has any use at all, as it informs the present day activity, and allows itself to be molded to new sets of experiences.

Art is about opening up perspectives, not closing them down, and that is the democratic spirit at its best. Otherwise, the past is a rigor mortised religion, and history is an excuse for brutal, deathwish nostalgia. One advances into their art with no real concern about making history--their obvious concerns are about making their art, with some idea of what it is they're advancing toward, and what past forms are being modified and moved away from. But the judgment of history--as if History, capital H, were a bearded panel viewing a swimsuit competition--will be delivered piecemeal, over the years, after most of us are dead, and our issues and concerns and agendas are fine dust somewhere. The artist, meantime, concentrates on the work, working as though outside history, creating through some compulsion and irrational belief that the deferred import of the work will be delivered to an audience someday, somehow. 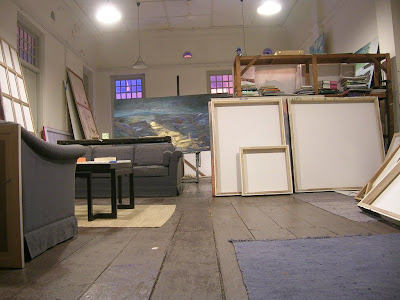 That is an act of faith, by definition. The artist, painter or otherwise, also cast their strokes, with brush or mallet, with the not-so-buried-dread of the possibility that the work will remain unknown, shoved in the closet, lost in the attic, and they will be better known for their day job rather than their manipulation of forms through a rarefied medium. History, for that matter, is not some intelligence that has any idea of what it's going prefer in the long run--the best I can offer is that history is news that stays news, to paraphrase a poet, which implies that the painter who survives the tides and eddies of tastes and fashion and fads will the one whose work has an internalized dynamic that is felt long after the brush is dropped and the breathing stopped. History, however, it comes to be made, and whoever writes it, is a metaphysical dead end the better art makers sidestep, and instead make the punch and panache of their invigorated wits count in the strokes of the brush, the curl of the paint scudding over the surface, the blurring and clarifying of forms, shapes, colors and its lack: painting, coming from the modernist angle that still seems a sound and malleable way of handling the hairier knots on the chain, comes as where the world ends, the limit of what the eye can see, the forms the eye is blind to but the mind, muddle that it is, tries to imagine in a sheer swirl of perception. It is about the essaying forth of projects that strive for a moment of perfection that suddenly dies with the slightest re-cue of temperature, it is always about the attempt to convey a new idea. The articulation of the fresh, original perception may end in inevitable failure, but the connections made along the way, the bringing together of contrary energies made the attempt and its result worth the experience.

This seems to be the material that the shrouded groves of History recalls, the earnest and frenzied striving of artists who are too busy with their work to realize that history may, or may not, finally absolve them of strange rage for paints and brushes.
at October 29, 2017