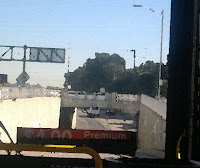 It's prudent to refrain from declaring someone a bad writer merely because you might dislike a particular piece they've written, particularly a poem. Bad poems happen to good poets who write them, and such is the case for Tom Sleigh, who's poem "The Hole" I slammed awhile ago when I first read it in Slate. Perhaps my case was over stated, but I still think it's a stinker, but lo!, doing a Google search on Sleigh produced a bounty of helpful info on him, and some of his poems as well, all of them ranging from pretty good indeed to absolutely splendid. Sleigh might be tone deaf occasionally--my own work is too often a drone one experiences in vacuum cleaner product testing laboratories--but he is , in essence, a solid crafts men, a genuine lyricist. His erudition creates resonance , not static, and what I especially liked is this poem:

Mist rises from the river,
the moon nowhere in sight,
only thick-leaved trees sweeping the cool black.

Secret in her power, like a sunroof
sliding open to the air, Athena touches you
and makes you, to yourself, younger, stronger

--vital as the river where rats
along the bank breed in the sweet grass
infusing the heavy air,

the radio tower
above the quiet city beaming
from its lone eye a voice sobsinging,

"Spring can really hang you up the most" . . . disenchanted
siren who sings you back into yourself
warily hoarding the charmed strength

of your middle age, your eyes not on the stars
but on a shadow under the trees
like Cyclops in his cave

praying to Poseidon to deliver you
to destruction even as you boast, "My name
is No Man, No Man is my famous name--"

the car hurtling weightless through the open night.

The lives of the gods are truly our own as Sleigh
invokes the classic paradoxes, challenges and tests in unpretentious language that sounds like it is actually addressing tasks that have weight, are a burden. All this rushing, hurrying, desperate conquests of obstacles are no less and no more important than the jitters of nervous gods on a hot night on Olympus, and as we humans struggle with torpor and fend off the urge to fall asleep behind the wheels of cars, we draw our strength from gods we've forgotten the names to. Similarity is everything, and it's merely a matter of scale --Herculean meets Walter and Mrs.Mitty---but the frustrations, satisfactions and the moods in between are the same.

The language as well is enticing, intoxicating, set up with verbs and adjectives that artfully stationed; the movement is tangible, as in the sharp, effervescent sweep of the opening.Fine, fine writing.

This is a panorama worth of John Dos Possos's from USA Trilogy, in a world where it would seem Harte Crane and Wallace Stevens have their personalities melded for a sense of the Supreme Fiction settled in a city we recognize as very much like our own.
at April 07, 2007