"In Flight Couplets": by Alfred Corn 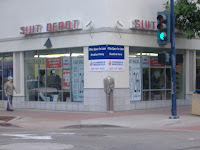 Alfred Corn's mentions of Mandelshtam in this week's poem ought not be made too much of, since it's name dropping vanity to mention the great Russian poet in a poem that he, Corn, is writing about his own fears of being forgotten as an artist
in the event of a catastrophe that would eradicate his name and the words he wrote. It would one thing for a poet to compare himself to another writer if that nervous one-to-one resulted in work that surpassed the fragility of the author's self-image and touched on matters that involved a readership larger than those who are entertained by the poet's

version of mirror-gazing. Norman Mailer is notoriously obsessed with his fame, influence and his position among the writers of his generation and the generation before him, but he hasn't be disingenuous about his craving for influence and praise, and has worked hard to make that liability into a problematic asset.

Fraught with peril, the self-advertising resulted all the same with memorable books that transcended the neurotic center of Mailer's ego and got him to engage events larger than himself, whether massive antiwar marches, political conventions,

Moon landings. The scheme was simple, effective more often than not; there were Mailer's expectations of how he would change things when he wrote about personalities and events, and then the realization of what was actually underway; Mailer got beyond to best DosPossos and Hemingway and Faulkner at their own games and became, instead, a voice unlike any other of his generation. Not well liked by many folks, yes, but undeniably the author of several brilliant books that flourished despite his worst habits. The secret was that Mailer knew when to get out of the way of the story.Corn does not know when to step aside, though, and the constrictions of the sonnet make his subject a swim in the muck that comprises a writer's vanity that cannot transcend itself. His poem "Windows on the World", nominally about 9-11, was a distanced recollection of cranky ironies that were whimsical rather than resonant with the solemn associations we would term "poetic". Horrible attacks were reduced to being mere finger exercises for the poet to limber up the writing muscle. This week's poem again works a similar airplane/bomb

equation, and there is poor Alfred Corn, prisoner of text, scribbling away the words of his own epitaph , as if this page would be discovered, identified and applied to posthumous notices if the worst that happen indeed took place. The silliest thing of this whole poem is that Corn wants the audience that would read him after he's nothing but splattered body parts that he read Mandeshtam. It's comical; if one cannot be remembered for their work, they can at least be remembered for their good taste.
at April 24, 2007