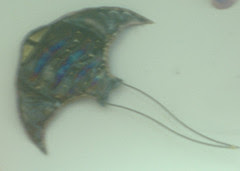 An interesting poem about snow, if you can beyond the horrid recording of poet Debra Nystrom reciting her work.As usual,the recitation of the poem is marred by the outstandingly consistent ability of Microsoft's software to suck the life and warmth from anyone's voice; I'm not being ironic here, given the title. If there were someway for the engineers to adjust the sound quality to make the voice sound more alive and feeling, it would be appreciated, As is , poor Nystrom sounds as if she's packed in a trunk. Yet it may be an appropriate tone given the downward slant of the poem's psychic terrain, a general survey of isolated farmland in a blizzard,where isolation becomes it's own reason for being. Dreary, stalled, obsessively committed to her own stasis in the surrounding field of furious snow, Nystrom gets the gloom and borderline despair grow and take hold and quite literally form a weight that sits upon you;

you think of cutting the motor off to sit
in the tractor cab awhile, radio songs slowly
fading out as they suck the battery dry

There are things to be done in this bleak world, yet the extended absence of other voices of similar age and experience, the cessation of life until spring thaw, proves to be an enervating element that is at times overpowering. Nystrom chooses the language well to get across the mood, finds comparisons with her character's interior life with the exterior climate that are swift and clear

Snow here seems analogous to sleep and sleep, rather obviously, is some depressed longing for death, death as an idealized state where there is only silence and no voices buzzing with their chatter of attenuated relationships or failed life-defining projects. What works here, I suppose, is that the poet compresses the mood, starting in the center of it and then moving out with details of the white, lifeless landscape; Robert Lowell's confessional prolix is not this poet's style, it seems, yet neither is Raymond Carver's terse,truncated lines. She is closer to novelist and short story writer Russell Banks, who knows full well the quality of being snowed in, as if buried alive.
-------------------------------------


"Hippopotomonstrosesquippedaliophobia
" by Amee Nezhukumatathil is my kind of poem, funny in a way someone can be if they have a discreet sense of the absurd that might float an irrational idea just so so that it has the dual effect of initial plausibility and then lagging clarity. The punch line , in other words.

Nezhukumatathil (yes, I cut and pasted her name in this spot) smartly side steps any obvious lectures that might have occurred to her to deliver regarding prejudice, identity politics, or the cruelness we foist on another. Rather she sympathizes with the perplexed reader, the bewildered student:


On the first day of classes, I secretly beg
my students Don't be afraid of me. I know
my last name on your semester schedule

is chopped off or probably misspelled—
or both. I can't help it. I know the panic
of too many consonants rubbed up
against each other, no room for vowels

to fan some air into the room of a box
marked Instructor.

The empathy she expresses leads to an unforced litany of big name diseases and conditions that are truly frightful to consider, and just as unlikely to cause anyone harm as her elongated last name. Nezhukumatathil keeps the anxiety localized , in human scale, which relieves her of the need to construct a global argument of a sort, with the attendant sweeping rhetoric that would've overwhelmed the heart of the poem. The writing is clear and graceful, just this side of whimsy; the appeal lies in the idea that this situation they all can get through if our sense of humor is in place.

What I read and heard was the sound of someone talking to a group of other people, imagined perhaps, full of perfect responses to the problematic nature of her last name, but still with a conversational thread working on that leads her audience, real or imagined, away from a source of fear so there might be some distance where humor can undermine anxiety and prejudice and discussion of a sort can begin. These items and words and definitions are nonsensical, sure, but they're not used willy nilly. Nezhukumatathil moves her ideal set of students into an ideal absurdity.


But most important, even if they did cohere, it would cohere into a poem that is still intolerably banal. The poem coheres very well, in tone, scansion and the implicit movement of ideas and their undermining. In this case, a underplayed notion that one shouldn't let an irrational and unfounded dread of new things--long names, new places, new relationships-- freeze one's possible responses to a larger world
they have to enter and act creatively in. This is anything but banal, though a straight moral lecture would have been dreadful, to coin a phrase. I admire the way she underscores her point through implication rather than direct argument. This allows some creative movement for the reader, who either gets close to her point or has license to make their own with her materials.

I wouldn't call this poem didatic, since it actually moves away moves away from didacticism, even to mock it with all the knowing references to ten syllable words and their obtuse definitions.The point of exaggeration is to reveal the absurdity of those banal items that create tension and fear, which is precisely what Nezhukumatathil does here.The imagery here is appropriate in so far as I think her escalation of complex terms and the bugaboos they define are in keeping with the logic (or lack of it, rather) that keeps individuals uptight. Effectiveness is what counts, and I think the poem, a good, small poem about a banal irritation in the poet's life, is effective in clearing ground and allaying fears without lectures, rage or insults. It operates the way a good put-on does, a straight faced declaration of some wild state of being whose meaning is grasped, or created after a particular spell of gullibility is cast.

I think it's her intent to veer to things that are not odd or eerie in and of themselves; though she never abandons her lyric bent, there's conversational quality of "jumping around", from item to item, sans cogent transition, that is faithful to the associative leaps actual talk assumes. This is idealized speech, of course--real speech transcribed is unendurably repetitive-- but I think she succeeds in blending her craft with a workable premise of what intriguing speech would sound like. Elmore Leonard writes amazing and intriguing dialogue in his crime fiction although we know full well no one actually speaks as engagingly as his characters.

Still, we suspend our protests and allow his crime novels to engage us. Nezhukumatathil has a harder time of it, since Leonard has the length of a novel to make his approach plausible and realistic seeming, and she has only the span of a poem. Her problem is not to overwhelm her subject with an excess of rhetoric or flourish and yet be "poetic" to get a sense and a tone just right, to capture some essence.

This is an elliptical monologue with the actual ellipsis removed, with the seamlessness meant to direct the theoretical students the narrator is addressing from their standoffish through an inspection of the absurdity of their fear. and finally to reassurance, provided with this:


I will tell jokes, help you see the gleam
of the beak of a mohawked cockatiel. I will
lecture on luminescent sweeps of ocean, full

of tiny dinoflagellates oozing green light
when disturbed. I promise dark gatherings
of toadfish and comical shrimp just when you think
you are alone, hoping to stay somehow afloat.

Cockatiels, toadfish and comical shrimp are appropriate , I think, because the poem concludes with something of an invitation , a promise that there is more to be gained by being open minded about new experience than there is by remaining closed and unduly protective of one's set view of the world.
at March 08, 2007