Martin Scorsese Gets His Oscar 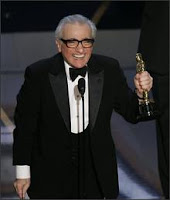 I caught the last hour of the 2007 Oscar Awards last night, just in time to see Martin Scorsese finally get his overdue award as Best Director for The Departed. The conventional wisdom and the buzz was that this was to Scorsese's night to finally take home a statuette, and I'm pleased the speculation bore fruit, but I can't help but think that they gave it to him for the wrong movie. Well, sure they did. Martin Scorsese should have gotten a Best Director award for Raging Bull, King of Comedy, or Good Fellas.

While I don't argue with The Departed being Best Picture and Scorsese's efforts here as the best of 2006--there was some strong competition from Children of Men and Letters from Iwo Jima-- the three films already mentioned are better examples of what Scorsese can do as a film maker when he takes us into his world of stylized character studies of those who live at the margins of the culture and the collective
psyche. Winning for the Departed should have been an addition to Scorsese's Oscar garnerings. In a fairer world, this would have been at least the director's second nod for the award. Anyway, good going Marty. I was also pleased to note that The Departed won for Best Picture as well.

It's assuring knowing that the Best Director helmed The Best Picture, as I've never understood the logic of splitting the decision in years past between two different films.Of course, it's all business, a chance to assuage superegos and to lend more Oscar buzz to potential box office returns. But it's glaring on the face of it. Oh well.This is Show Business, where cognitive dissonance isn't a disorder, it's a job skill.
at February 26, 2007