Mark Conway's "Tarot Card of the Dreaming Man Face Down" 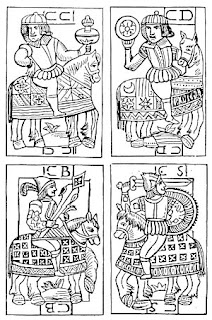 The tragedy of someone's death isn't that someone is no longer with us and that it's a sad and unjust matter of the universe that such a rich
life force is now extinguished.

No, it's not that, no matter our intense desires to fetishize the dead with praise of genius, great qualities and fantastic deeds. Those who have died are merely dead, after all, they've ceased feeling pain and mental anguish, they've gone beyond the nagging anxieties that makes Life a blood pressure reading we must keep our eye on. For all the hosannas and energized grief, for all the post-mortem reviews that might catch God's passing ear and perhaps persuade Him to allow the spirit through the improbably crafted gates, we are , in effect, frantically flattering ourselves for having had the acquaintance, claiming acquisitions of knowledge, wisdom, beneficial examples with each chat and shared drink; it's subterfuge, after all, and we pad the walls of our psyche against the irrational, powerful, consuming waves of rage and grief.

It is the living who are in pain, in various stages of mortal panic, it is the living who have to yet again close another house in their neighborhoods of the familiar and realize again, and again that those who are leaving this terrain are dying not through accidents or natural disasters, nor from age much in advance of their own, but from a mortality that wears a face much like their own. There is no longer distance in the deaths of those one knows, it is no longer a distant reference abstracted through complicated strings of association and family ties. Each passing leaves a tangible space next to you; you feel something gone, a wind blowing through an old house. We attend memorials, we go to services, we bring flowers to the grave site, we cushion ourselves in ritual acts and pro forma talk regarding death and dying, and yet still there is panic, anger, roiling, seething grief, a rage that remains. Mark Conway's poem Tarot Card of the Dreaming Man, Face Down gets to that tertiary layer in the geology of the soul and, I believe, gets it right when his narrator begins to admit that the rituals are not enough to handle a close death; he bites his lip and allows the thoughts to form, hard, bitter language, caught half way between poetic expression and stammering rant.


Then it was gone, the beatitude
of your body,
specifically there,
black, black, blue, heavy
as a dead dog, the back
of your legs
looking plastic, looking extra, trailing
behind the rest of you
like a mooch, like a goddamn moron and you
barely there,
already caravaggioing your way
through the light
and dark, mouthing the prime numbers
of eternity .

The memory of someone's entire lifetime is reduced to ritual and ornate templates of otherworldly inevitability, and this something that suddenly seems cheap and besides the point. Conway's narrator speaks for anyone who has the conflict during memorial services of thinking that the extended and costly protocols of death and burial being false and morally repugnant and yet sitting through it all, choking on combinations of tears and sorrow. One wants to be like Lear and tear off their clothes in the rain while excoriating themselves for their purchase of such now-conspicuously shabby delusions of order and purpose, yet one keeps their seat, ultimately uncertain of what lies beyond the last breath one takes and the last beat a failing heart manages. There is only the chance to live in that uncertainty, leave the ritual be, and acknowledge anger and selfish rage in the deeper recesses of the soul where true feelings reside in unthinkable cohabitation.

Where you are, slipping
through the monstrous
inner membrane of the world,
you see how it works.
I, like a mooch, like a goddamn moron, live.

We waited for you. Two or three days.
Then an old man came and prayed

Searching for words, Conway's narrator attempts the elegant and the poetic to make his ambivalence ironic, to create another kind of distance between his emotions and his constructed equilibrium, but what comes forth is only confusion. Conway's poem works for me because it is not dense with literary or to the cultural references, although the piece cites them. Conway goes past the dictionary contextualization, or the gnomic referencing;he does not pull an Ezra here and drop obscured names and terms into a verse without pause to make them emotionally relevant. Our narrator seems tongue tied, between a cultivated voice that makes easy resizing of responsive emotions, the other wholly inarticulate. What happens are high cultured points stripped of their critical trappings with their naked appeal to emotion bared yet again. Something tangible in Caravaggio's dark paintings is revealed when his name is here used as an adjective. The poem is a elliptical account of the inner struggle to regain composure and the overwhelming desire to collapse under grief's smashing weight.

The inexpressible cannot be written or spoken into being; the truth that does arise is the insoluble fact that goes on, life is for the living , that goodbyes must stop and one's shoulder must return to the wheel one is obliged to push through obligations. One needs to stop dreaming of a visit from an gone soul and learn to live in the spaces formerly occupied by another.
at January 31, 2007