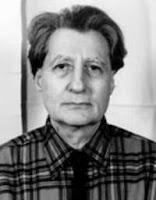 Jackson Mac Low came to read and lecture at the University of California, San Diego in the late Seventies while I was an undergraduate there, a benefit of having a Literature Department whose poetry doyens in presenting experimental artists. The reading was in a basement room of a large University facility that doubled as an undergraduate art gallery, with Mac Low, in dark coat and a fine head of long hair, standing before a screen as slides of odd numeric and word sequences and arrangements flitted by when he clicked on a control.

The reading, we can say, was not the sort of thing that would- be Ed Dorns or erstwhile Ginsbergs had been prepared for; the word combinations came in spurts, punctuated, quite literally, with silences, stammers, elongated repetitions, until it became clear (to the few in the room who might have been truly curious) that Mac Low had his allegiance with the earlier Modernist poets, especially William Carlos Williams. Words, although latent with meaning and associations that cannot be completely deferred, still have tonal properties that can be organized in ways other than literal meaning.

MacLow's "chance system" theories of composing verse satisfied few readers/listeners, but there is a rigor in the method he used in a lifetime of work, and a genuine curiosity of what one can do with poetry than reaffirm the old themes. At the time I was more or less baffled, taking it in as future banter and bullshit for a student party, and the others of my station seemed to be smiling a little too hard, too earnestly as they jotted various notes in the crowd, making smart talk with their attending faculty. MacLow, as I remember, seemed perfectly amiable, although he seemed not to feel compelled to explain his ideas in simpler language. Good for him. Stating that poems are "unreadable" is slippery here, since it's an accusation tossed about by too many readers describing difficult poets. As an experimentalist, Mac Low hardly forgot about aesthetic pleasure; in fact, it's safe to say that he was bored with the standards that were in front of him, had no use as to what the general concept of beauty was, and went about seeking the company and energies of others who shared an interest in seeing how new art can be created. Granted, there is nothing less appealing than yesterday's avant gard, but there are a number of artists, Cage and Mac Low among them, who merit serious attention after their passing.

Mac Low is hard to read--a better term-- largely he was given to experimenting with new compositional techniques, "chance systems" as he called it, and the result was meant to challenge the reader/listener to approach the work differently. I happen to think that there is quite a bit of his writing that is perfectly readable if approached on its own terms. But Mac Low's work, like Cage's, wasn't about delivering pleasure wrapped in a consumer friendly package, but rather about the incidental things, the noises, the random words, the accidental pairings, the overlaying of contrary sounds, that lay in the spaces between the words and the notes on a page. One either opens up to the possibilities, or one does not, but even here one's reservations and resistances are important to explore.

In any event, Mac Low's work as poet, composer and collaborator was a lifetime endeavor, he in his own fashion sought beauty and new perception for his work. .Cage and McLow both to read about and around, if not through, and to look at. Cage was among those, like Mac Low and earlier modernists like WC Williams and Stevens who thought that a poem "...should not mean but be..." (Archibald MacLeish, "Ars Poetica"). Cage, of course, was less materialistic than his earlier American poets and was attracted to the chance formations that Zen study gave him the stamina to imagine containing in particular compositional systems wherein the innate sound and tonal value of each element in a limited terrain find a new aesthetic arrangement, the aesthetic of what the eye sees and the ear beholds for that fleeting moment and then vanishes.

My favorite thing about that McLeish quote that gets trotted out all the time is the way its mania to define poetry defines itself right out of the category That is exactly the meaning of the quote, that poets have to write their pieces "out of the category" of conventional verse and create, instead, new ways of writing and reading poems. It's about ways of seeing the world and recording the experience in a manner that would revolutionize perception. Bob Perelman addressed this whole notion of experimental geniuses who sought to revolutionize the way readers came to experience the world in his book The Trouble With Genius; sussing through the writing and aims of Joyce, Gertrude Stein, Louis Zukofsky and others, Perelman caught the usually undiscussed detail that these experimentalists,
preparing the literate world to reshape their thinking about writing sequence, had in fact isolated themselves with their own genius from the public they wanted to influence. The bold originality of their work had made them geniuses, but of a different sort than one regards DaVinci, Einstein, or even a Henry Ford. Perelman’s modernists were writers and aesthetes, and were geniuses of poetic form, not practical application. It might be said that there was advancement in the sort of difficulty poetry and prose could encompass, but these were problems of interests to already marginalized audiences, other aesthetes, poets and academics. For reconfiguring the world through a radical expansion of the senses, the modernist project was a failure. But as literature, this generation produced their masterpieces, problematic though they were for a wider audience. This is the great conceit of the experimental artist, a project doomed to failure so far as the universal revolution is concerned, but what remains in the resistance to old categories are, none the less, new ideas of what poets ought to be doing for their own time.

Modernism's experiments with imagism and vorticism and a host of other revolutionary projects might not have reconfigured our audio and visual senses, but they have, still, given us some newer ideas about image, idea, rhythm, scope, subject matter. Much of what we take for granted as the given of modern, conventional verse wouldn't be possible sans these seemingly indecipherable experiments, which isn't to say that poetry not have changed with the times. Without our savant grades and experimentalists, though, it would be substantially different. Well, let's look at the poem itself. The spirit is the same for Mac Leish as it is with Cage and Mac Low, that poetic language needs to find new ways to address the world we experience. Mac Leish wants words to have a particular "thingness" that can get the substance of the objects it strives to be about; that the thing -in-and-of itself is its own adequate symbol. MacLow and Cage were more interested in the lost arrangements of the hidden world, the sounds and objects one finds in those odd moments where the mind fixes on seemingly ephemeral details of daily endurance. In either case, there is a search for a truer way of getting perception across to a reader. What separate them are strategies, not sympathies.

For love
The leaning grasses and two lights above the sea--
A poem should not mean But be.
at August 22, 2009