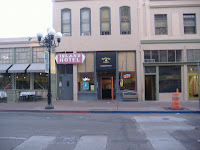 Intertextuality , the notion that text, whether poem, novel, third grade reader or medical textbook, can refer only to other text gets an awkward expression with Linda Gregerson's poem "At The Window" ,a poem published in Slate in December of 2006. selection. The reader, it seems, finds themselves locked inside the gloomy room of perception, wishing there were a window. And some air. It fits the would-be verse, a writerly and clustered screed on religion, death, the purpose of events and the objects within those experience. It's more a theory of a poem, really. Dry. Brittle.

This is a dreary reconfiguration of Augustine's
stalled obsession over the
state of his body's
peculiar refusal to adhere to God's all inclusive
bitcheness, and the use of a substantial quote (to be polite) from the sainted
theologian against a
memoir of personal loss, the death of a parent, is
a
stretch and a strain.

It's pretentious and dishonest, I think.The intoning of the successive suppositions, each intended to make us pause and consider the limitless minutiae in which God's animating force resides, becomes, as both reading and writing, a grind.What works well for a rapturing Confession does not make for a poem of the sort Gregorson attempted here; giving the section eccentric line breaks, to suggest rhythm to which the conditional phrases might hint at swaths of thick , slow liturgical musical will not give the borrowed writing a lift. Gregorson should have better paraphrased what she borrowed and have it better mirror the deferred narrator's sad recollection of his (or her) mother passing away at an early age.

There was an opportunity for a revelation, when words written in complete abandon in an effort to sense a deity's essence and purpose for the world slam up against real feelings from actual experience, with the glory of the literature is found wanting. Perhaps the transition from the uncited Augustine usage to the parallel scene where the dying mother announces "I do not know why I am here" less jarring. This is film school stuff, a quick cutting between past and current scenarios, and while the method is sometimes effective in the right writer's hands, it is ineffective here.

The stitches from joining these uneven parts together show. You realize that the author has a time of it reconciling losss in clear language; the generous use of of cumbersome syntax with the high-falutin' references and rhetoric sounds unnatural . What we have are strange sounds rather than feeling at all. Gregerson attempts is a pastiche between an t established text and and a recent memory, with an unsuccessful result. It would effective if , perhaps, if there were a suggestion of unexpected continuity between the past and present, and that there is a reason why we use similar narrative schemes through the periods to account for our interior experience. There can be something provocative in such a blur, with poetic resonance being a result.

We get instead a theory of a poem, an outline. The flaw here seems to be that Gregerson chose erudition for it's own sake rather than use her reading as an enhancement to her senses, creating distance between her and the subject she sought to explore; the poem is self-reflexive in an uninteresting way, waxing on about literature's limits. It's a tired trope, really, and it's time that more poets realize that most of us realize that literature is, of course, imperfect in getting to the distilled reality of experience. Perfection is not and should never be the intent in writing about something , just as literature ought to avoid itself as subject. It is the attempt to get to the heart of things that interests us.That is the essential goal of poetry, the expression of the inexpressible in terms of the unforgettable (to borrow from critic John Ciardi).
at December 13, 2009