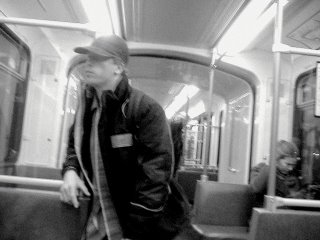 Dispite loud grousings about the quality of poems Slate's poetry editor has posted over the last year, Robert Pinsky has lately been selecting writers who've managed to
get the synapses firing again. A nice balance, poems out the ordinary that are still
readable as parse-able literature. I tip my hat.

In all, I like Kathy Fagan's "There's just one little thing: a ring. I don't mean on the phone.' "—Eartha Kitt" quite a bit, 'though I do understand why it wouldn't popular with some other readers. Insular, private, full of jokes that are not sympathetic to the sorts of mental laugh tracks we carry around in our unspoken narration of our lives, Fagan's poem is a deliciously dicing up of several strands of cliches and , archetypes and popularly embraced bodies about conventional thinking.It's not that Fagan performs the vacuous tasks one witnesses in second and third strand writers who give us large slices and gigantic wedges of non-sequiturs and mashed up syntax in an erring conviction that they are extending what Language Poets started in the Seventies and finished some years ago, no, Fagan's constructionist welding of diamonds, movie stars, eleganza, fashion, eroticism all have their purpose, which is to reveal how matters of desire, lust, power are undercurrents in our affairs. We are locked into a matrix of sensual drives and concomitant needs to posess to posess and dominate, however rational our philosophies about selflessness and abstractions of love explain our actions. Fagan crams these combating together, and uses unexpected rhymes to link what at first appears as unbridgeable topics, areas of concern

...the figgy pudding slash
kwanzaa stew,
the yuletide blogging,
the tinsel, the garland,
and eight maids eggnogging,
allow me to mince
neither word nor pie
and provide advice
and a list forthwith:
Do not buy and regret,
dear. A diamond
is what to get,
dear. Its extra weight
I'm built to carry.
The starboard lilt,
the opiate
drag on one knuckle,
I'm willing to accommodate
and promise not to buckle
under.


The speaker, the narrator as it were, is the personality at the core of a personality that wants to use any means needed to satisfy a craving,
a yen, and all this is done in the spirit of pure playfulness, an infantile base that regards others as mere resources and means to gather and exhaust each momentarily engrossing object of desire. Whatever tongue it takes, whatever rhetoric needs to mustered and sustained, whatever verbal mask needs to be worn, this personality, given voice and presented as an unvarnished result of a consumer culture that has undermined institutions like Politics, Arts and Religion that were thought of as means to keep our drives and selfishness in check, trips lightly over the meanings of each area she mentions as she (or he) associates freely, each sudden rhyme sufficient for a shallow logic that uses any excuse and reference to reinforce the hard, cold need to get ones way, by whatever seductions one must use:

It's my time to
plunder, and have a little lovely
something, a nothing-too-modest
something, to set off
all this black
and dazzle the crosshatch
right out of my skin.
O halogen track,
O twinkling lights,
O shining star
upon the highest bough:
you'll soon learn how
to be the ladies in waiting,
stable pony to the thoroughbred,
Martin to a Lewis,
Cathy to a Patty,
mere vein to the carotid—
i.e., to be outwatted.
O Christmas
tree, dear dreidl,
could it be more plainly said?
Some demand the head
upon a platter, others lick
the silver off their spoon.
This childless mother
desires neither moon
nor man but the carat
dangled all this time.
So snare it,
Santa, from that other
sorry cow.
The Baby Jesus phoned,
says I should wear it now.


Someone remarked in passing that Fagan's poem seems too much of a mashing together of Madonna's songs, especially "Material Girl" and the song "Diamonds Are A Girl's Best Friend", implying that Fagan's subversion is in fact generic, ie, it's been done before. Not quite, I'd say.Madonna's songs and the archetypal "Diamonds Are a Girl's Best Friend" are achievements of a kind in that they go along way in valorizing and making heroic the crass materialism that Good Society would consider rude, vulgar and tacky.

Madonna was particularly smooth in her post-modern gestures by assuming the fashionable stereotypes of women, the caricatures of whore, mother, lover, saint, and mixing them up in ways that manage to exhaust all irony from the poses. "Diamonds Are A Girl's Best Friend" is comic in intent, and is the material of a situation comedy, and , alas, it is a conventional
trope that remains with us, dressed up in the guise of "Sex In the City". One is about style and it's
disreputable partner, fashion, and in fact encourages liberation of young women through even more slavish consumption, by which one means bearing the costs of products to support the voguish poses. It's a wallowing in sheer emptiness.

"Diamonds", and the film from which it's drawn "Gentlemen Prefer Blondes", is mounted as if it were a polemic of women against male hegemony, but in the end it is a cartoon depiction of the struggle, as it were, and in both instances one realizes women are typified as witless, trivial creatures engaged in nothing constructive other than schemes for their own temporary pleasure and advancement, powerless to change their way of their own accord. Fagan's poem collapses many archetypes, tropes and bastions of conventional wisdom upon each other and gives us a personification of the core personality the core ideologies and popular artifacts keep alive and hungry for more consumer insanity.

It's a high minded and artful exposure of the slippery sets of rationalizations and justifications that are built into our lingua franca. Fagan warns us, albeit playfully, that for all our philosophies and stated principles of moderation, fairness, and service to one another, we are able, very able to outsmart ourselves and make life on this planet miserable for ourselves and our fellow citizens.

Fagan's writing is interesting for other reasons, specifically her ability to interogate the rhetoric and tropes of received thinking--assumptions and rationalizations we garner from institutional powers rather than our own critical powers-- and yet retains an ear and musical sensibility that delivers a real poem with a discern able subject. She does this with a light touch and cogent phrasing, and her results are striking, unexpected. And poetic. She does not reinforce deep seated nostalgias for a world one imagines is gone or displaced, rather she shows how the language we use to describe our lives is a mechanism that keeps us in our place, compliant and consuming.
It should be said that the recording of Kathy Fagan reading this poem helps tremendously, as she reads it as a poem with words and phrases that have interesting sounds. She enunciates, she pauses, she places her stressed accent points in points that that does justice to the resonance I imagined this having when I gave the poem an initial read. She is a poet who knows the sound and in terms of different specialized jargons and sources of slang, and she can switch gears between them, sometimes having them inhabit the same phrase, with a rare mastery. This is the art of collage, by way of John Heartsfield.All the cheap rhymes, the facile comparisons
justifying the use of another for self gratification
as only natural attraction ("...Martin to a Lewis...") concludes, finally, with the ceaseless punning and the tinny music of the slant rhymes and conceits with the Baby Jesus saying that it's a-okay to wear the shine and gleam of the ring, to literally own the stars and the flow of the moon upon the earth that is , finally, only there for one's amusement and solipsistic play. Fagan, giving us something that resembles a talk Gordon Gecko would have fancied had he the imagination of a cubist, gives us a noisy, clattering music that rises from the bit of howling, yammering need, and hers is a poem that points to how the language and beliefs that are supposed to liberate us from the burden of self can and in fact us does compel us to debase each bit of the sublime we possess and instead consume, spend and eviscerate the world while wearing the tanned skins of our formerly held virtues.Fine poem, and a tip of the hat to Pinsky for choosing it.
at October 25, 2006