Put Your Ipod in the Microwave 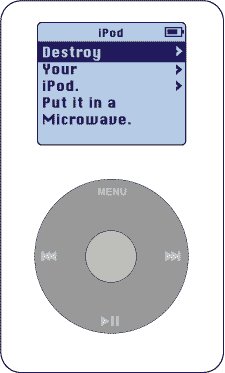 I neither own an iPod nor wish to get one. As a user of public transportation to work, it's an expected sight to witness row after row of collage students , gang bangers and men and women in various states of middle age creep sitting or hanging on to rails with the earplugs in, long white wires filtering down to the nearest pocket, staring off into some spot on the bus where there is no gaze coming back, looking nothing less than already defeated and depressed by the day ahead of them, there thumbs dialing the volume of their 85,000 song list up and down. Contrary to what the expectation of solitude they think headphones assure them, they are in fact sharing their music with everyone on the bus; muted bass lines, screaming guitar solos, muffled vocals, thudding drums, sounding as if the iPod were in tin can at the bottom of a storm drain,
blasting away under the batteries went dead. Not a pleasant sound. On one ride a passenger trying to read a newspaper had had enough with this ugly sound and stood up to lean over the aisle and poke a student wearing the device to turn the music down. "Fuck off," said the punk, "I will fuck you up".

"Turn your shit down" the newspaper reader repeated, and at the point I got off the bus to get to work, thinking that it was a low irony that music hadn't soothed the savage beast, but rather only pissed him off royal, all before 8 o'clock in the morning.

I'm not an erstwhile   Luddite,  but I would venture that folks hunched in a seat wearing iPod headphones don't look as if they're having a "more active, enjoyable inner life " as a result of technology. To a man and a woman, they look withdrawn, wan, depressed, and for all the joy having instant access to every song ever recorded is supposed to confer upon them, they, as a class, fidget and twitch. More often than not their music is simply too loud, and the muffled hizzzzzzzzzle of music is forced upon all seated near them while they damage their hearing, oblivious to the rights of others. Music is then merely a garish or inane wallpaper that puts the world in a position to talk to the hand, speak to the fist, mumble into one's Styrofoam cup rather than interact with the world. This isn't to say that each of us needs to greet and discuss their issues with those they don't know in some mistaken idea of participatory democracy; iPods, cell phones, anything form of  headphones frees one from the common courtesies that make life in the city bearable; the small things that keep us civil--the nod, the thank you , the excuse me, the small things that keep our hands unclenched and our limbs relaxed, are taken  from our  interaction toolkit, leaving little else but blunt, stumbling, aggression. As with the cell phone yakkers who fill every public space with the blare of their voice detailing every inane detail of their day , iPods are
evidence that what technology makes it easy for consumers to do is inoculate themselves against the world and convince themselves that there's no need to give a flat fuck about whether others think you're a jerk for imposing your gadget-happy fetishes on their fellow citizen.
at March 30, 2011