Frank Rich and David Plotz Fill in a Vacume 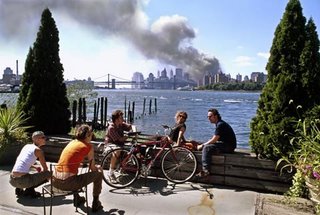 Photographer Thomas Hoepker was one of hundreds of his trade who worked on September 11, 2001, getting the images that would help us define a momentous day in our history. A photograph Hoepker withheld, pictured, has caused something of a stir in the Pundocracy whose members like to reduce complexity to tasteless and easily passed morsels. Frank Rich of the New York Times invests the shot with these words:
"What he caught was this: Traumatic as the attack on America was, 9/11 would recede quickly for many. This is a country that likes to move on, and fast. The young people in Mr. Hoepker's photo aren't necessarily callous. They're just American. In the five years since the attacks, the ability of Americans to dust themselves off and keep going explains both what's gone right and what's gone wrong on our path to the divided and dispirited state the nation finds itself in today."

David Plotz of Slate.com found Rich's summary distasteful and responded in opposite adjectives here.The fact of the matter is that we don't know what these people were talking about at that instance when they turned their gaze away from the smoking Manhattan skyline and toward each other. It's striking in contrast to the host of dramatic framings we've become accustomed to seeing in relation to 9/11; there is an eerie calm here, an image of people who seem to have stolen a moment for themselves to reflect, ponder, digress among themselves while the rest of the world collapses on itself.

All the, what were they saying? We don't know, and we cannot know for sure, and the lack of documentation makes some on the public soap box to tell us what it is they see in the details (or the lack of them) , later to be followed by yet another hack with a megaphone taking the opposite tack, emphasizing the same details (or ones he imagines) to suggest an opposing qualities. Disengaged? Debating vital issues? Bored and indifferent?Shocked and outraged? All the evidence, such as it is, is there in David Friend's photograph,and it strikes you, after reading Frank Rich's mandarin claims about this being a country that likes to move on and David Plotz's assertion that this is evidence of Civic debate, that we haven't the slightest clue, not the faintest shade of a hint to what these folks were talking about, nor what they felt seeing New York seem to give itself up to fumes and flame.

Idylls of the cave, to be sure, and one assumes smart men like Rich and Plotz have taken a variation to Intro Philosophy. I suspect they have and attribute this phony controversy to deadline pressure and the irrational notion that one must say something significant on a significant anniversary. So much eloquence and banality has come and gone in the five years since the attack that every truism has been mined, every fresh expression of outrage, grief, hope, patriotism has been formulated and put forth that there's a desperation to devise fresh metaphors, new simulacrums through which our rusty platitudes can be channeled. Centering on the photograph and it's alarmingly un-alarmed image would seem the perfect dust storm over.

But we don't know what they were thinking, nor what was said, and the suppositions of Rich, Plotz and other smart guys who might join this faux fray are engaged in undertakings that Daniel Boorstin described in in his 1962 book "The Image", a deft, precise and early description of how news organizations willfully create non-events to cover in order to sustain themselves as an economic entity. One may mention Baudrillard and his limitless meanderings, but this is something that is closer to a Don DeLillo novel, and is especially re-mindful of White Noise, wherein two department chairmen, one the head of the Department of Hitler Studies and the other the director of Elvis Research, confront each other for a colloquium.

What they wind of doing in front of students from both departments is citing various random factoids about Hitler and Elvis, the smallest scraps of information, the most arcane and useless tidbits only intense research could yield, all to no obvious purpose, nor effect. But everyone is happy and glad that reasonably sound and sane summations were uttered, however untroubled by a crucial absence of context. Rich and Plotz are people who are paid to say intelligent things about important subjects, and speak they did. But at the end of their respective days I can't help think that they're aware their words regarding this photograph were extensions of wishful thinking, and five years after the attack on the towers they, like the rest of us, are still reeling.
at September 13, 2006