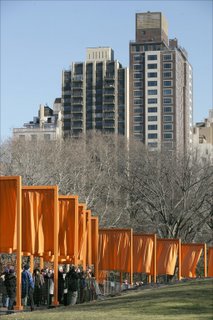 Christo is a ridiculous celebrity who has managed to make a famous and assumedly profitable living repeating the same trite idea, in this case a matter of convincing townships, city governments, government bureaucrats to grant him permits and permissions, and donors to give him sufficient funding so that he may wrap another building in massive amounts of swaddling cloth, or hang a Leviathan laundry line across an expanse of inaccessible space. Okay, we get it, you introduce one aesthetic element into an area where we wouldn't have expected to run into it , thereby creating something of a framing device which decontexualizes the familiar and forces us to reconsider our relationship with the spaces we inhabit, the spaces we pass through, the spaces we create where there were no space before.

It's a not a new idea, and scale does make the make the project any more important, let alone profound, nor does it make Christo and his cult seem any smarter, except one does admire the craft with which they manage to get usually positive press and use an accumulated reputation to marginalize critics (or just plain non-experts) who might wonder aloud how one succeeds in getting paid for engineering these philistine notions of art in public places. For the Gates, you suspect he and co-worker Jean-Claude were inspired while shopping for bath mats and shower curtains.

The fact that there is a line of them, going along a path doesn't diminish the out-scaled tackiness of Christo's singular idea; we have in our midst the equivalent of the bad joke teller who repeats a punch line not once but three times in the course of a stop-and-go round of small talk, with the wan and waning hope that someone might chime in with feverish paragraphs to explain the punchline, to create context and criteria, to invent terms from whole cloth (appropriate analogy) , couched in vague and mysterious use, that have the sound of authority in defending the failed attempt at humor, but lacks something in the area of a tangible , comprehensible idea that gives us a spark and makes us say aha!.

It seems unlikely that Christo and co will have as many defenders and contexualizers and exploiters of invisible success at their side with this effort; he is simply too old to get away with this stuff anymore. What he ought to consider is a marketing himself as a celebrity spokesperson for Tide, or Cheer, or some such miracle whitener; it would be a chance for him to admit that he's a hack in a way that's more artful than the work he's managed over the last dozen years. Metaphorically, it would a chance for him to come clean on his deal.

The ephemeral essence of Christo's applications of swaddling cloth can't hide his bankrupt aesthetic. Christo's body of work consist of one idea, and what's obvious is that it's the application of a gimmick, a trademark rather than an investigation of problematized proximities. There's more than a hint of the Dada gesture in the projects , but there comes a point where "Oh wow" is replaced by "So what?"

Nearly every artist who wants to commit public art gives a variation of this apology for what they've foisted on public space, and in fact this sounds like an echo of my paraphrase above for same such explications. Fine as the reasoning might be, you really can't escape the fact that large scale works are oftentimes only measurements of ego , not intellect nor talent. Had Christo done things with more variation in his life as a celebrity avant gardist, he might not be producing yawns.Art in public places is no less subject to criticism and value judgement than that safely on the walls of museums and galleries. There are public works that succeed brilliantly, like this from Picasso , in Chicago. Why and how they work are issues for larger discussion, but we in these famous cases we have the work of painters translating their visual notions from canvas to three dimensional space,working with materials they were not accustomed to. The spirit of surprise exists in these pieces, and it's both are in situations where one may indeed scratch their and wonder productively about their relationship to the community sphere. Christo is oblivious to such a real inquiry, and you're stuck with the idea that he was eager to clear off his drawing board and get the piece erected and ocumented in order to fatten up his portfolio. Where The Gates
went up seems unimportant
at August 30, 2006