ANN COULTER IS A SNARL ON A STICK!! 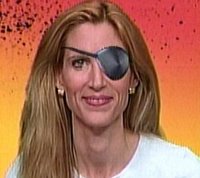 Ann Coulter is not a fan of free speech. the way she obsessively and pathologically typifies any and all who disagree with her as "traitors" , ie, all registered Democrats, makes it clear that her preferred method of resolving debates would be mass arrests, Stalinist show trials, and public executions.    This, I believe, is her deepest, most fervent desire. For a self-proclaimed "Constitutional lawyer", she seems constitutionally incapable of addressing her opponent's arguments rather than their character and motives. The fact that Cindy Sheehan and the 9/11 widows she excoriates in her new book have substantial and powerful arguments besides their moral authority as victims is a matter Coulter doesn't bother with; it's too late to make a case for the righteousness of the Iraqi War, and it's obvious to everyone that the Bush White House has squandered through unrelieved incompetence and arrogance whatever moral pretext they might have had in the fight against terrorism.Poor, poor Coulter has hitched her dingy to this sinking ship, and she is too much of an unblinking sociopath to admit that she made a very bad choice and cut her loses. She has exhausted her arguments and becomes the pundit's version of an old rock band touring with creaky renditions of yesterday's hits; liberals are bad, liberals are evil, liberals are godless. The especially unChristian rantings of Ann Coulter this time out no longer sound provocative, nor create fruitful debate, or force anyone one of us to interrogate our own beliefs, as good debate ought to. Her new book and her latest rounds of distracting ad hominem is much the same as hearing the news that the news that the Rolling Stones are touring and have a new record out; you wonder out loud who among the many you meet in the world still give a rat's ass what kind of noise this band of gnarled geezers makes. Oh hum, okay, fine, what else is on? Ditto for the latest outbreak of Coulter's crone-ish cynicism. That Coulter sticks to Ann sticks to CHENEY/ROVE talking points instead of sussing through the problematic nature of policy and the ambiguities inherent in trying to manage a roster of projects, and her inability to think beyond ideological purity, ala William Buckley or George Will, makes her views into harangues and rants, shrill forms of posturing. She ratchets up the volume as the moral authority of the Bush White House erodes and Republicans are continually mired in corruption and incompetence. Other conservatives have been smart enough, wise enough to distance themselves from the Iraq war rationale, concluding that it was a mistake, a horrible, tragic, moronic mistake. But not Ann; rather than rethink her position as a competent analyst would, she avoids talking about the White elephant in the room and continues to rail against liberals, apropos of nothing, with the same sarcasm and condemnations she was using six years ago. Her flustered, unblinking hissing fit on the Today show against Matt Lauer, who questioned her intentions in the way she addressed the 9/11 widows, shows America the image whose own fingernails are barely keeping their tentative grip on rationality. All these liberals continue to mock her and thwart her plans to make America pure and chaste, and all the effort has caused both her body and her wardrobe to loss heft. Why, those short, short skirts barely cover those bird legs, with their bony knees and those thighs that ripple with the loose flesh of someone who has lost too much weight too quickly. But no faster than the rate her credibility has waned to such substratum levels that only low-rent Machivelles find her appealing. Damn those liberals, damn those mothers who've lost sons and daughters in fruitless combat, damn those who take their right of dissent and redress at face value. Traitors, traitors all!!!
at June 07, 2006