Sidney Bechet Deserves Better Than This 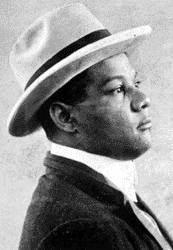 Poems evoking the names of jazz greats is one of the favorite gimmicks of writers who are stuck for an honest opening line; the mention of an improvisor's name from the early days of recorded music gives you an instant atmosphere of the old and serious sort, and gives the writer a fast entrance to the expressway of half-realized musings. Most often, as I've read them, the ploy , the name dropping does not working. Irony is still something that needs to be worked for. A seeming homage Sidney Bechet and to the ease and perfection of his playing becomes a tale of envy, a dwelling on the ideal of form of women that reveals itself to true artistic masters, becoming, in the end, a dual edge cry of resentment against better , more masculine artists able to coax the "burnt sugar" from their metaphorically female muse, and against women in general by way of a not so subtly implied extension of his thinking.Moss has some issues here, I guess, but there's nothing I can read that suggests he's working them out in an interesting way. It's one thing to be enthralled by Bechet's reed work as he improvises and whirls like Nijinsky over the band's rapid changes, and it's admirable that it inspires to write a poem in inspiration.

It's admirable, that is, if the inspired work equals and even surpasses the wonder and awe Bechet might have stirred in Moss's observer Michaelangelo.Even a nasty, power loving grouch like Pound believed that art was supposed to galvanize every creative and aspiring force in a human being and deliver him or here to a state of transcendent creativity, a higher plain of perception from which to alter the world.One may disagree whether that goal, in itself, is a plus or a minus so far as poetic intent goes, but the point is that Moss's narrator is evidently disillusioned with the whole process of art, of creating and finding new ways of seeing the world. It's implied that he feels his own work is inferior to those he isolates as untouchable geniuses, and then complicates his ambivalence further by casting a specious erotic edge to his musing; inspiration, lyricism, heightened perception were a sexualized essence from the feminine muse that it was their duty to attain through coaxing, seduction, or force. The implied picture with Moss's last few lines is as unattractive as the mood that seems to have motivated this poem:The sunrise bitch was never mine.He brought her down. In twelve bars of burnt sugar,she was his if he wanted her.This is not a poet sitting under a tree on a spring afternoon contemplating clouds and heavenly wonders; rather it's a guy at the end of the bar slugging away at beer as he broods and gets angrier about a universe of smarter men and unattainable women conspiring to make he feel like scum. It's an ugly creation here, and I'm convinced that Moss is being ironic or creating a character not himself.

This is less a poem than an outburst you wish an associate hadn't blurted. But there it is, out in the open, a snake pit exposed.I think it's simply a failed attempt at an ironic gesture. What's complicated--as opposed to complex-- about the work is stuff that's not in the work and still in Moss's head. What he manages, his protests to the side, is to write a piece that envies violence, metaphorical or otherwise, to achieve gratification. He travels periloulsy close to endorsing rape as an unspoken yet viable option for the Walter Mittys among us to use.
at April 30, 2006