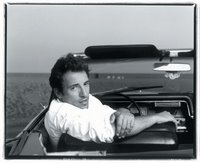 Where the trend had been for old rock stars to attempt to give their careers a third act with the issuing of albums wherein they croak their way The Great American Songbook, aging Blue Collar Hero Bruce Springsteen goes the other way and releases an album of old folk songs. The search for authenticity continues, and the plain-spoken Springsteen--remember when each of his lyrics was interminable operas of intemperate desire?--sings it plainly, clearly,
simply. No swelling melodies here, no subtle segues or seducing counterpoint.The new folk album, some have said, is suitable for Bruce, as he was never a great melodist anyway when he was doing the songwriting. I'm not a huge fan of The Boss--it takes too much work to reissue the same objections, and after twenty-something years of bitching and groaning, I'm willing to maintain he's done music I've liked without embarrassment.

Bruce Springsteen isn't Duke Ellington or even Burt Bacharach as a melodist, but that was never the point of his work since his sound is big, brash and in-your-face rather than, catchy, seductive or otherwise subdued with subtler chord selection. His music is equal parts rhythm and blues, Phil Spector, British Invasion and folk rock, with generous portions of Kerouac, Dylan and a wee tram of Whitman stirred into the mix. For the sort of blue-collar exhorting he does about love, death, being broke and struggling for a better future, Springsteen's melodies are exactly as they need to be; at their best, they work as well as anything a popular pop-poet has managed to do. When his work is contained and crafted, sufficiently edited, he's easily as good as Dylan as a melodist, the equal of Seger, the equal of John Lennon.I have found too much of his music overworked, grandiose and cluttered with the kind of business indicative of someone who hasn't found the central theme of what they're writing about; we see this in poets who compose at length, leaving no trace of a parse-able idea behind them, and one can witness it as well in novelists--Franzen, DF Wallace--who haven't in them to cut away the excess so the art may show. Springsteen has this problem as well, a habit of overwriting, and the effect in his longer, louder pieces tends to be a little Maileresque, circa the mid to late Sixties, where he keeps preparing to say something profound and yet the message is deferred. I prefer the punchier, grabbier, riff-based rockers he puts forth, or the terser, grainier ballads. The big band material he comes up sinks as fast as any Jethro Tull concept album has in the past. It's about songs, not the arrangements.

Springsteen singing old folk songs and protest songs interests me not in the least, although it might be a means for him to ease into the writing decent material for his next great period. Dylan landed into a profound late period, as did the Stones and certainly the quizzical Neil Young. Bruce would be a dandy addition to the grand pantheon of old guys,\ Productivity isn't, by default, a desirable trait. Talented artists can dilute their impact and lessen the esteem they've held in with the rapid issuing of mediocre, substandard or half-baked albums. Costello and Dylan are prime examples of this, although both songwriters frequently rebound with strong albums after some artistic lagging. There's an appeal for artists who aren't in a hurry to release product--I am a fan of Paul Simon's solo career (not crazy about Simon and Garfunkel music, which hasn't worn well) who has released albums at a snail's pace over the last thirty plus years; he's a careful writer, and his body of work is therefore rich with strong, moving, intelligently evolving music. His musical ideas work more often than not. The same may be said for Steely Dan, a band I've always admired for their consistent excellence for melody, production, oddball melodies and especially well-crafted lyrics. Being slow to release albums of late places Springsteen in honorable company.
at April 26, 2006