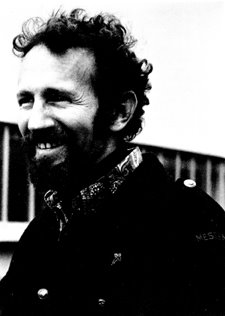 It would be one thing for Philip Levine to write a comic narrative about his college days and his hanging with nominally radical friends and eccentric cohorts, but you think the novel or the short story is the superior form for what he's trying to do here. His poem,"Our Reds", gets nothing is done that is worth mulling over longer than it takes to send email. This reads like notes and character sketches for longer work where the real writing takes place.

Let us bless the three wild Reds
of our school days. Bless how easily
Gaunt Vallejo would lose control,
the blood rushing to his depleted face
while his mistress in a torn trench coat
stroked his padded shoulders to calm him.
We'll call him Vallejo after the poet
only because he vaulted into speech
in such a headlong rush. (In truth
his name was Slovakian.) We'll call
her Lupino after the film star
because she was more beautiful
in memory than in fact, her cheeks
drawn over fine bones, her hair
tumbling down from under the beret,
hair we loved and called "dirty blond."

This is a not a poem, but a pitch for a movie script that hasn't been written yet; you can nearly hear the index cards sliding one over the other.

Levine should have rethought his premise--a group of friends bored to death during a college lecture--and may be conceived this as a dialog piece, the sort that William Gaddis would have done in his novel JR, or Elmore Leonard in any one of his choice Detroit crime novels. Fellow Detroiter Levine has the material here, and I could imagine the absurdist four-way dialog between the exasperated professor and precocious radical undergraduates in a cavernous lecture hall on the Wayne State Campus; it needn't be along piece, requiring an ear tuned for human speech, and an eye for the spare, telling detail.

The poem fails because it strives to be a condensed and potent summary, fast and punch like vivid recollection itself, but it winds up being merely crammed. This is too many items for a suitcase this size, an imbalance that negates the intended pleasure this reading was meant to induce. Rushed is the word I would use where others might say "breathless"; Levine's writing here sounds like he's rattling off a schedule of things he wants a receptionist to get done while he's hurrying out of his office, one arm in a coat sleeve. It would seem he was trying his hand at an Albert Goldbarth ramble and rant, without the crucial talent to keep the string interesting to the reader; in Goldbarth's poetry, it is the process and commentary that is the point, not the final argument. Many poets try their hand at this style, and very few are anywhere as interesting as he is. Levine isn't one of them, not in this instance.

It's a sure bet that Levine meant the lecture sequence to be comic, bad as it came off, and the sudden sentimentality in the last stanza is abrupt and unprovoked. The mock-blessing of the names, their deeds, and their personalities as they separated and cast their fates to the wind seems nothing more than a disguised exit sign over a door leading you out of a poem that doesn't work from the first sentence. Ken Kesey has a great short story called "The Day Superman Died", a fictional recreation of his friendship with Jack Cassidy. It's an incredible story, funny, sharp, bouncing with lively writing, spirited conversation and engaging weirdness when, at the end of the story, Kesey goes soft and drifts into a long coda that invokes the names of fifties writers and artists and comes as nothing more than a sorry, nostalgic cry for a return to innocence. Innocence cannot be regained, of course, and is a permanently rich subject for writers to wrestle with, but not at the expense of crucifying their good art for the sake of cheap sob over a brooding beer.

Would that Levine brought Aristotle into play in the poem. Hard to do, yes, but not impossible. Levine's problem is that he tells more than he shows, and the telling isn't that interesting. It has the vague nagging of a droning voice at the end of phone conversation you don't want to have. Mention of philosophical forbearers here--Aristotle, Hegel, et al--are window dressing. Subtle manipulation of their ideas through movement might have made this compelling, but the references just sit there. Like unread books, or unused barbells. The comic element is here, and of course one can make a case that the poem lampoons, or tries to lampoon each generation of would-be radicals and avant-gardists, but the success for this kind of work is in the delivery. Timing is everything, and timing acknowledges and makes use the skewed rhythms of human speech, especially speech that's improvised when there is a disruption the normal give- and- take of comfortable, banal banter. It's Levine's voice that does this piece in for me; his narrator is mirthless and does not seem to understand pacing or a punch line's religious reward if done right. He's not Woody Allen.
at April 03, 2006