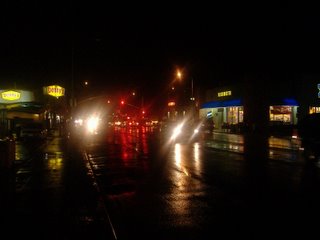 Let's tell the truth about these guys: metal has been boring as soggy granola for decades, but Metallica's music, unvarying as tract housing, has lowered the bar to the point that the band name is fated to become a synonym for torpor, ennui, skull-crushing lassitude .This steel tempered barrage is the audio equivalent of the hooked leather tassels some varieties of religious extremists flagellate themselves for sins they've yet to commit against their humorless god.How do you like your punishment?Faster, heavier, angrier, meaner, edgier? Sell your house, burn your car seats and cancel your dinner reservations because Metallica is going to chain to the wall of the first cave they come across where they intend to throw every hard note and quicksilver scale in their arsenal at you. That's what they wanted to be when they appeared so many distant days back when, but they got to the convention right as they concluding gavel was pounded and the other bands were either gearing up other musical approaches,or seeking other employment. They've always tried too hard , and have fairly much given off a corporate feel to their music. Let's compare them to a Ford Truck: BIG, LOUD, POWERFUL, and utterly characterless. Metallica has done little more than make the reigning cliches and tropes of metal louder, bigger, stupider. This is the music for those who cannot wait to have what dead registers of hearing they have left made erased like chalk drawings. Soon, the sound ceases to be what this band is about; it becomes the vibration, the rattling of the teeth, the spinning senses, the incipient nausea that follows a good pummeling. Listening to Metallica is the next best thing to an anxiety attack, and for many who crave this ceaseless noise, fast and beset with routine tempo shifts , ostinato screams of wounded and placeless rage and throat-cancer vocals , this is the closet they get in a week to feeling as if they have a life worth showing up for.I pity such folks, but there are limits, especially on a day I counted on sleeping in on the first day off in three weeks of being nice to cretins, simps and various other illiterates who want to argue their taste in stores where I work.They should vanish, go away, stop at once rather than continue the sluggish tragedy that is the sum of their continuing existence, as well as the unerasable fact of their loathsome, drooling legacy. After that, we take hammers to the cell phones
at February 04, 2006