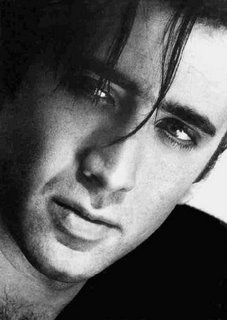 The Weather Man drew my attention when I heard what the film was about, but a disappointment and slight depression came on me like a foul wind when I read that Nicolas Cage was in the title role. A pity, since this would the ideal role for William H. Macy, who has made a career of finding the core loneliness at the center of characters who have to maintain public faces. Cage is a neon sign that is never off, buzzing with some circuits burned out or blinking madly in both daylight and night. It's a predictable set of histrionics he has assembled inside that little bag of factory tricks he owns for the defeated purpose of catching a viewer by surprise. He is as formulaic in his performances as Tony Scott is in his excessive jump cuts and jitter-cam pacing; neither can trust an understated moment, or let character and story develop in ways other than frequent bursts of problem-child energy. You dread being around the man at the end of Halloween night. It's certainly a smart idea to explore the eternal vacuum that one imagines occupies the minds of the relentlessly cheery sorts of who impanel the local news shows, but there's that sinking feeling when Nicolas Cage is selected to play the principal character. It's not that Cage lacks the demonstrative ticks and shticks to animate the sort who has no passion or life force beyond their presence in front of the camera, it's just that we've seen them again with little variety or invention since Honeymoon in Vegas, Face/Off or The Rock. Let us add Leaving Las Vegas to the odious list; it cut close to the bone here, but the film valorized the lead character's slow and purposeful suicide by alcohol, and we were made to endure an implicit propaganda that it was somehow a noble act to leave life in this way. This ass-ended wallow in Hemingway machismo dealt with the subject with an expectedly heavy hand--it's one of those films where every scene is weighted in increasing measures so that the gravity of the hits you hard. Not hit you, so much as falls from on high like Monty Python's sixteen-ton weight, a accumulation of gross bathos and animal logic that lack for no nothing except grace or a light touch from director Mike Newell. Cage is allowed all the space he needs to wallow, writhe, stumble, slur and fuck up as his death rattle impends, one of the most overplayed death scenes I remember coming upon. It's curious as well that Cage nabbed an Oscar for Best Actor this year; routine actors going berserk in generally undistinguished films are no strangers to Hollywood's highest honor. Cage and fellow Oscar winner Denzel Washington (Training Day) share that bit of fallow distinction. 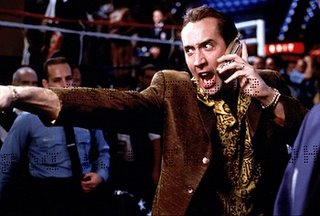 Those likewise not convinced of Cage's greatness may insert their own examples of where this bogglingly blank method actor doesn't so much chew up the scenes he's in as much a takes a wrecking ball to them, mixing twitch, itch, tick, thousand-yard states, mumbling and inexplicable Elvis-isms in slight reshufflings, movie to movie, in a consistent display that an amassing of quirky mannerisms is the same as creating a character. In fairness, Cage has been in good motion pictures, specifically Raising Arizona and City of Angels, but these seem accidental or merely a case when directors knew what do with his alternating states of a catatonic slump and manic maneuvering. I recently paid good money to watch him in the political comedy Lord of War , due mainly to some artfully edited trailers but lo, instead of a black comedy along the lines of Catch 22 we're instead subjected to a two hour monologue from Cage’s drawling character, with no real point to make other than a conveniently easy irony aside. One or two lousy films from a good actor are forgivable and you hope for better work to come along soon, but Cage has been awful in bad films for so long that his name alone dampens that fleeting curiosity about the movie. For Weather Man, this ten dollars is staying in my wallet.