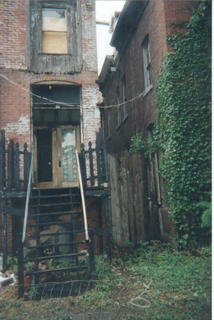 she was hours ahead of schedule
so she sat down while the clothes
did their spin cycle thing and in an instant
was in the backseat of a limousine
that moved up a long black avenue
to where the skyline became a spire
like hands pressed together in prayer
under lights of the night that makes the
windows of the soul fall sad expressions
down to where the holes in the street
are deep with where the rain
gathers in songs about closing time
as drinks stick to coasters on bars
burned with matches and gouged with
penknives where names are carved over names
called from payphones one checks
for returned coins as they walk with baskets
full of socks which she collects and mends
and sells between shifts at the Woolworths
where she stands at a register under a cardboard
poster of orphans with wide eyes who look as cute
as they starve themselves
to becomecreatures so beautifully
taut on their boney frame
that they cease to breathe
but now her watch beeps
just as a buzzer sounds
and clothes stop rotating
and all the dreaming stops
suddenly, suddenly,
hard like brakes
screaming in the distance
just as you drift into a sleep
that is now stolen from you.
at September 09, 2005