A City Was Magic in Black and White Magazines 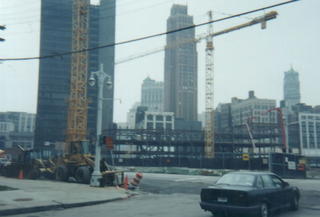 In a hurry and half dumbwith love, he walks through an alley,scratching his scalp,and whistles another country's anthem
in an age when TV headlines have itthat the sky never stops falling,He stops, sings a stanza in French, "My Cherie Amour", and skips mightily passed all the rear entrances and trash bins Simon and Garfunkel would have waxed and waned about in a language that made the obvious things in the city oppressive with meaning secreted among the rheumy lines of grime and gunk,
he laughs, thinks bunk, I need her armsand a good meal with amazing bread,
bottled water, baskets full of cheese, and thensomeone screams in the city,
a woman on a corner screams for life and more money
from whatever carpassed on a wet street, the night was filled
with screams and the hiss of tires slithering up back streets
and alleys that used to be short cuts in another decade
when a city was magic in black and white magazines,
there are many hours until the sun comes rises over the river,
light rays poking between the suspension cables
of sleeping bridges,days to go before something falls from the sky again
with all the heaviness assembled weight can bring on the length of the streets,
minutes away one of our own leaving the coil
that binds us as another joins the chorus,
too young in the first moments to hold sheet music
or know what we're attached to in these blurs that
come alive from their darkness and approach him in the dark,
he sings on,too late,he's asked"Where you from, "and he singstoo loudly to heara metallic clickand a bark of large dogs,he was expecting everyone to join in the chorusbecause love is all that matterswhen everyone knows the words,but instead the nightblackens all at once,a curtain drops,every line is unhingedas doors would bein a fast, devastatingheat coming acrossa flat Nevada desert,a city of jewelsburns high on amountain top,there is onlylight to follow,cordless , stringless musicat the end of corridor filled witha very white light.
at August 26, 2005