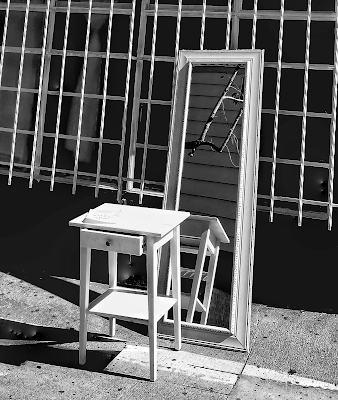 Fearless is a fine word, but a bit melodramatic. Blues musicians and musicians in general, I suppose, can be expected to engage in a bit of high-rent hyperbole when discussing matters musical. It's a trait I engage in. In any case, I look less for “fearlessness” and all its Saturday matinée associations and seek instead musicians who have confidence in what they're doing. There is that threshold we must all cross, built of self-doubt, stage fright, anxiety, when we're about to step onto the stage, but the one who will be the professional, the one who is going to turn in stellar performances more often than not, is the one with the instinct, the knack, the desire to entertain, delight and amaze others to convert fear, bad nerves, doubt, the shakes into energy that fires the brain and the limbs and makes all the synapses fire; the training, the practice, the wood shedding stops being experimental and preparation and transforms itself into confident, self-assured professionalism. It's a quality of being that allows the musician to pretty much do anything he or she has their mind on doing.

Concepts do not exist of themselves, self-contained. The idea of courage is meaningless until one grasps fears, embraces it and walks through that wall of uncertainty that would otherwise prevent the person, musician or not, from doing great and original things. It's walking through your fears and getting to the other side, stronger, tempered, with greater confidence in one's abilities. Fear I believe is a great motivator toward acts of personal courage. It should be turned around, I think. One cannot be “fearless”, but one can live with less fear by taking risks, advancing toward goals one might not otherwise have attempted. Less fear. That seems closer to the real human condition, something that is achievable. Doing away fear is a nice goal in an abstract world, but eliminating this element from the range of human emotion threatens to turn musicians into automatons, machines. If one does not know fear by experience, consequentially one cannot know courage, that is, one cannot be brave.

These are polarities that depend on one another to be useful in any discussion using either of the terms. Neither fear nor courage make sense without the presence of the other. Sans fear, an element I believe is always present in every human being (unless one is a sociopath), courage is not possible. That is why I'm thinking reversing the term to that of having “less fearing” is more useful and presents a more coherent picture of what you're attempting to get at, as it describes how fear, always present, can be mastered to an extent and turned to one's advantage as the hero, a musician in this case, advances toward that quality called courage. It saddens many to realize that fear cannot be gotten rid of or dissolved in any way because it's an intractable element of the intractable human desire for self perseveration. It can, though, be eliminated, and people can be taught/trained to perform wonderfully despite the fears they have.

Email ThisBlogThis!Share to TwitterShare to FacebookShare to Pinterest
Labels: FEAR