WE WILL NOT COWER BEFORE KAUR 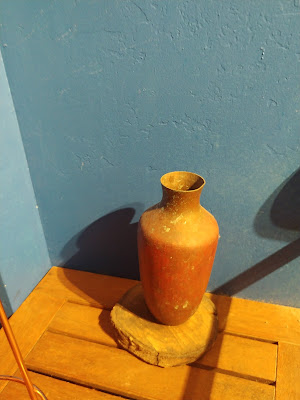 There was a time not long ago when I'd write an easily composed 1000 or so word diatribe eviscerating mediocre poets, which is to say poet tasters I eccentrically considered subpar, egocentric without compensating genius, bombastic without ballast, cryptic without elegance, or elegant without grit.The truth of the matter is that it's nearly easier to write, with verve, negative reviews than to write positive notices for those bards I actually enjoyed. Of course, former pleasures become burdens and for the last few years my talent for impaling the poetically inept bored me to something less than a puny yelp. There are too many rank poets to bother with; I am outnumbered and outgunned.What does raise my hackles a bit these days are generous essays by bright writers extolling the virtues of the god-awfullest scribe in our midst.  Perhaps I'd should mention as well that in those former times when I desired to be the scourge of half-baked versifying I was speaking too loudly for little insight to be heard;it's been my goal to tone down my rhetoric a few notches, although I cannot guarantee that I won't turn my amplifier up to the eleven mark yet again as tripe is served.

A long piece by Rumaan Alam in the New Republic makes a case for the stick figure poetics of Canadian Instagram poet Rupi Kaur. Though softly insisting that her verse is not to his taste, he argues that there is validity in the kind of platform she is using, the self-obsessed imagery she posts to accompany many of her finicky line breaks, of her treating legitimate issues for women in such a way that reduces them to the most obvious sort of pandering. His article can be read here. Often there is a weird equivocation that goes on among those I ask if they think whether Kaur is any good. Not to generalize too broadly, but often they pause, clear their throat, and speak of her in terms that have no relation to the quality of her poems. Funny how we can agree that Rod McKuen, say, was an awful poet, and even some of us with strong feminist sympathies can admit that Erica Jong was a lackluster poet all this time, but when Kaur comes up in conversation she is handled with kid gloves. More power to her for using Instagram to get readers. It's a shame this poetaster serves up the thinnest gruel to the unsuspecting and naive.Make no mistake, Kaur is an awful, even dreadful poet when one of her works is made to suffer a critical examination. Sometimes you're left wondering if she read poetry at all. What I see is a young scribbler whose accomplishment has been to professionalize the very real concerns of struggling against a male patriarchy that, alas, still runs things. She has over three million followers, I hear tell, she has books that sell in the millions, and she resonates with readers who have read her work who, in turn, do not seem interested in reading poets who exceed the typically brief magazine captions that are the true literary worth of most Instagram posts.

This the poetry for the age of the anxiety cursed I Phone owner, a failure of the attention span on a massive level. The writer here believes that her lack of literary essentials is beside the point, and that her greatness is in matters metaphysical, which is too say, intangible and unprovable. I don't see what she does as in anyway mastering the beast of the internet and social media. Kaur has been consumed by it. Her role in this all, perhaps, is that she like the band playing music on the Titanic while it slips under an icy sea.