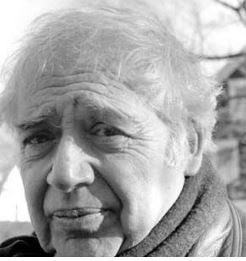 Harold Bloom, the Methuselah of American literary criticism, has passed away at the age of 89. Best known , celebrated and berated for his tome The Western Canon, an encyclopedic argument in defense of individual literary genius against the intimidating attacks from fresher and bolder currents in literary thought, Bloom became something a of a one-man cottage industry in his later years, producing a stream about books, some good, some brilliant, more than some so much mush, speaking of Dead White Males and the poems they wrote. I am heavily indebted to his book The Anxiety of Influence, as it gives a subtle and useful dialectical model on how great genius influences great genius that follows through the centuries, with the younger men (and women) writing superbly in another stylistic, spiritual and intellectual direction than the great poet who influenced them, desperately trying to escape the long and looming shadow.

But as that First Great Genius was Shakespeare, a genius who Bloom argued is singularly responsible, in plays and poems, for the creation of what we regard as Modern Man and Modern Literature, the sage who began the whole unstoppable progression of how modern poets would write, escape from the shadow is impossible; The Bard is Present, no matter how much one attempts to be unlike him. You can argue with his sweeping conclusions, but the book I'm thinking of, "Shakespeare and the Invention of the Human is a critical delight. It may be that Bloom is luxuriating in the laziness of a higher caliber. The difference between them is that Bloom has a thesis that he's worked with for decades, a set of subtle arguments crystallized in his landmark book The Anxiety of Influence a brief but trenchant discussion where the Professor posits that Shakespeare is the premiere genius casting a long , indelible shadow across the legions of subsequent genius that arose after his time. Bloom argued that Bard's influence is so pervasive that no poet or other literary artists cannot help but be influenced by him.
Those great geniuses who've emerged after Bard's time have either engaged their influence from him and written great works extending, modifying and altering the system of metaphor Shakespeare changed our collective consciousness with, or there are other geniuses who've emerged over the centuries who, being painfully aware of the Bard's embedded influence on how sentences about human experience have come to be written, write furiously in the other direction, against his style, assumptions and rhetoric, experimenting, taking political risks, deconstructing, inverting, abstracting and defamiliarizing the artful language in ways only a new kind of genius would conceive and execute. But here's the rub: even for those great writers who've made great art with language that artfully contains the human impulse to go beyond mere description of the world and peer at what is behind the veil of enumerated appearances, Shakespeare is present, his aesthetic, his metaphors, his language influencing new writers in one direction or the other.

That is a rather crude summary of Bloom's basic premise and there are dozens of other notions woven through his life's work, but the point is that his a set of ideas that make the ideas tangible and convincing once the initial "aha!" of flashing insight wears off. It's not science, of course, but it is a craft, a profession, this kind of thinking, and what we have in Bloom who has taken his working theory and tested it against new ideas, new writers creating literature in cultures other what is routinely aligned in the Western Canon. Bloom, who defends the existence of the canon and wrote a book on the issue, believes dually that there are permanent genius and masterpieces of Western Literature, as he is a man who has made a career judging books with imposing standards. The standards are not fixed, though, and Bloom further asserts that the Canon is a living thing, like the American Constitution, a category of books and authors that must be continually revised as matters with human existence come to mean something different. All things said, Bloom's career as a critic was a brilliant one, and he was a joy to read and argue with as one passed through the pages of his exception-taking views.
at October 14, 2019