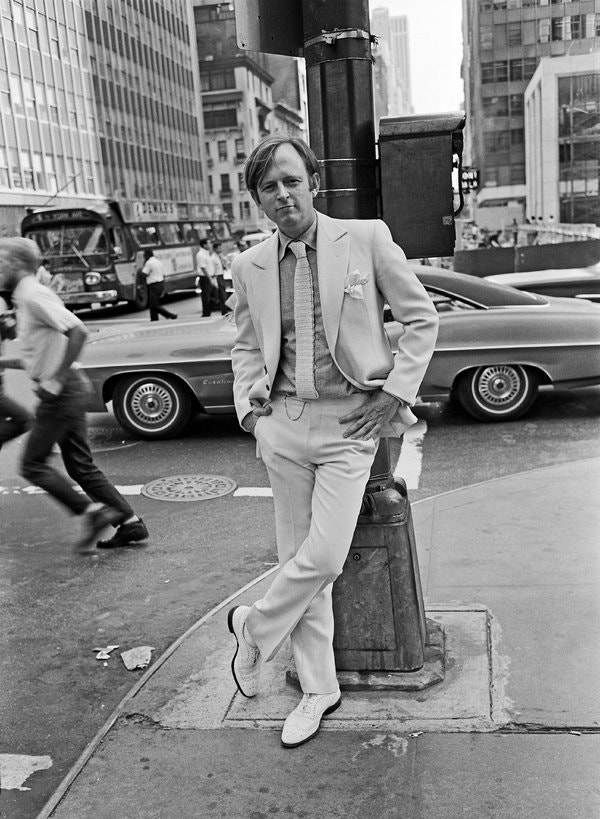 Tom Wolfe was alternately responsible for some of the the best and the worst of American writing that found its public during the Sixties. On the one hand, he invented a new lexicon for journalists, full of sound effects, exaggerated emphasis, sly allusions to relevant bits of obscure literature, acute character sketches, a discerning eye and ear for the revealing detail and phrase, and a snappy prose as well. His nonfiction articles were Heckle and Jeckle cartoons made prose, and with it he left us a few masterpieces, not the least of which being "The Right Stuff" and "The Electric Kool-Aid Acid Test". Of course, for San Diegans, there is the "Pump House Gang", his essay about the La Jolla folks contained in the same named book of collected magazine pieces. He fancied himself a social critic, and there were some things even a snappy prose style could not disguise., although his ability to rewrite and paraphrase complaints about contemporary experimental art and modern architecture were entertainments galore.He revealed himself a conservative in culture, but by the time that element was revealed, he had lost relevance to the current conversation. His essays became diffuse, stumbling, grouchy, suffused with barbs that missed their targets with an increasing frequency. Worse, I think, were his novels, where the snappy prose style vanished all told as he attempted to refashion himself as a master of the 19th Century social novel, best revealed in his first effort "Bonfire of the Vanities", a long, very long slog about how NYC corrupts the soul on all levels of society, from politicians, bankers, gangsters, civil rights activists...It was a festival of straw-men, as wearisome to read as the volume of "Atlas Shrugged" you found yourself slogging through for a book club. Wolfe was a mixed bag of results, but what he did well will remain in our canon. The best of his work, his nonfiction in my view, will need to be read by generations to come for readers who are looking for some salient clues on what America was thinking at a critical period.

As a novelist, Wolfe aligned himself with 19th-century social novelists Balzac and Dickens, with a strong dose of the 20th-century American novelist Dreiser, his aim being to become engaged with society at all its levels and with the citizens of all its sectors, high and low. Nice ambition, I think, but his novels for me seemed more like exercises of sheer will rather than genuinely felt inspiration. When he ceased being a journalist, Wolfe became a polemicist, in essence, albeit one with a Ph.D., and he seems to be the case of a man of obvious gifts, occasionally used to brilliant effect, who wrote fiction so that he would have a shiny example of the very thing any thesis he developed would have us think is the preferred kind of fiction America deserved.

As an artist/critic, (or critic/artist), I never got much farther than thinking that Wolfe needed to write novels so he could construct an all-encompassing proposal to cure the aesthetic missteps that were preventing artists from producing narratives that actually matter. That polemic he wrote was called "Stalking the Billion-Footed Beast", again chastising the current crop of writers, circa 1989, and proposing they follow the example he provides them with "Bonfire". Wolfe could certainly toot his own horn, and he could certainly switch arguments when it suited him; in 1973 he co-edited a non fiction anthology called The New Journalism, which featured articles by Norman Mailer, Joan Didion, Gay Talese, and others, journalists and novelists who created a new kind of journalism that employed fiction-techniques.In his introduction, Wolfe declared, more or less, that the conventional novel, the novel made up entirely from the imagination, had run its course historically, and the vivid nonfiction of New Journalism would replace it altogether.

To be fair, this is not a case of Wolfe jumping onto bandwagons as much as it is him building the bandwagon itself. Never without an interesting thought, never sans a flash of real insight and snappy verbs and matchless similes, Wolfe was, in my view, a failed novelist, artistically, something that can be measured by the fact that over the last couple of decades the discussion of the late writer's four novels has been virtually non existent. His novels seemed like the results of arduous labor, strained, repetitive, increasingly lazy in their verbal aberrations; his inventiveness turned into indulgence and dithering.

My friend Barry Alfonso, a writer based in Pittsburgh, sent me a note that added a crucial context for Wolfe in American intellectual tradition. He writes:

It strikes me that Wolfe is comparable in some ways to T.S. Eliot. Both of them appropriated the razzle-dazzle split-screen jazziness of their modernist moments to ridicule and attack modernism itself. They won huge audiences that were uneasy about the changing societies they lived in and uncomfortable with their roles in it. They played with the lingering guilt sophisticated people feel about rejecting cultural traditions even as they chopped, channeled and mutated those traditions themselves. Wolfe and Eliot had their avant garde cakes and ate them too while they stuffed them up the dilated hyperstimulated noses of the public.

A sound comparison to Eliot, Mr.Alfonso. I thought of John Dos Passos myself, a left-leaning novelist who was revolutionary in subject and experimental in the structure in his early fiction, especially in this USA Trilogy, but who later turned more conservative in his politics, writing a blander fiction for most of his remaining career. Dos Passos even came to become a regular contributor to the National Review. However, I think Wolfe as a writer was undone not by politics--a smart and perceptive conservative thinker is worth a read--but by his style. It goes without saying, usually, that writers with careers that span over several decades sees a decline in their work; some escape this curse by changing styles or expanding their worldview. Mailer, Updike, DeLillo, and Didion have done this. Wolfe began, I believe, with a flashy, impressive, dazzling virtuosity and never strayed from it, and seemed caught up in the challenge about how he was going to keep up the pace, top what he'd already published, how to go further than he had before. He gave up on finessing his sentences and became lazy and diffuse. I dare say his last book, The Kingdom of Speech, was a challenge to linguistics in general and Noam Chomsky in particular, was incoherent through and through, and factually incorrect on the history and practice of the subject matter.

Barry Alfonso adds this, in a subsequent message:

I think the Dos Passos comparison is apt -- the USA Trilogy used motion picture techniques to describe the fractured realities of its era just as Wolfe adopted the lurid colors and cartoonish gestures of '60s pop culture to capture the passing scene. Something you said about style prompts the following...your co-favorite chew toy (with Bob Dylan) Jack Kerouac was once asked which was more important: style or content. Kerouac said style because it CONTAINS content. This is similar to the McLuhan slogan that the medium is the message. I think this applies to Wolfe's journalism in the '60s -- the way he wrote embodied the essence of what he wrote about. And, as a critic, he was COMPLICIT in the cultural scams and absurdities he wrote about -- in fact, he had a hand in CREATING them. I suspect Kesey and company realized this. Ultimately, Wolfe was a cultural liberal facilitator/fellow traveler -- no, he was a cultural liberal PERIOD, even if he wouldn't admit to it. You can't make fun of executions by cutting off somebody's head, as a wiseguy once opined.

Wolfe was at his best at his craft when he was a journalist, more the observer than the commentator. His brilliance, we realize, was how used his verbal razzle-dazzle to characterize the accumulation of details, incidents,. the scenery and he had a knack for getting not just the revealing quote, but also those statements that gave his subjects the gift of personality. And for all his novelistic exuberance, he was anchored to the facts; the story arc, whether he liked it or not, was being drawn for him, and his inventions had to be restrained and made to cohere to what actually occurred. This isn't to diminish his achievement as a craftsman--he does indeed elevate journalism to art, as he does with Electric Kool-aid and The Right Stuff, two masterpieces that survive the hard judgment of time. As a critic, though, he began as a fun read, an amusing grouser on things that confounded him, ingeniously entering into a conspiratorial alliance with his readers who likewise were suspect of the claims and posturings of modern artists, architects and the communities of critics and taste-makers who made those careers. possible. He too quickly, though, became a habitual and distressingly imprecise curmudgeon whose complaints had less impact on contemporary thinking about cultural matters ; imprecise because one wasn't always sure what he was trying to find fault with, and because his writing became alarmingly diffuse, more rhetorical bombast, sound and fury, lots of grandiloquent throat clearing . He was making less sense as a critic, but it was obvious he was bitter. His last essay that sparked any significant conversation was his piece "Stalking the Billion-Footed Beast", his manifesto extolling novelists to become engaged with the world around them rather than write fictions that take readers out of the world and into an author's metaphorical neurosis. Beyond that, Wolfe's fabled gifts were all but useless in gauging how insane the world was behaving.