The Collected Poems of Ted Berrigan 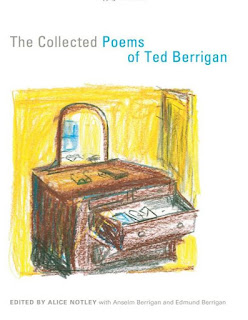 t's not enough that we have the same first name and the same Irish second initial, my attraction to Berrigan's poems was the rather unbelligerent way he ignored the constricting formalities in poetry and rendered something of a record of his thoughts unspooling as he walked through the neighborhood or went about his tasks. "Where Will I Wander" is the title of a recent John Ashbery volume, and it might well be an apt description of Berrigan's style; shambling, personal, messy, yet able to draw out the sublime phrase or the extended insight from the myriad places his stanzas and line shifts would land on. The world radiated a magic and energy well enough without the poet's talents for making essences clear to an audience needing to know something more about what lies behind the veil, and Berrigan's gift were his personable conflations of cartoon logic, antic flights of lyric waxing, and darkest hour reflection , a poetry which, at it's best, seemed less a poem than it did a monologue from someone already aware that their world was extraordinary and that their task was to record one's ongoing incomprehension of the why of the invisible world. Things To Do In New York City:


BY THE WATERS OF MANHATTAN
change


play cribbage on the Williamsburg Bridge
watching the boats sail by
the sun, like a monument,
move slowly up the sky
above the bloody rush:
break yr legs & break yr heart
kiss the girls & make them cry
loving the gods & seeing them die
celebrate your own
& everyone else’s birth:
Make friends forever

This is a poet who listens to himself complain and explain his pains against a backdrop  of  others in commute likewise obsessed  with their discomforts and who take pride in lasting just long enough in the streets, shops and cold water flats and paint flecked studios of Manhattan  to make it to the end of the day, to slip under the coming shroud of dusk and darker colors where tv dinners, drinks, a book  to be read aloud from, a check book to be balanced although there is no money, to deal with the needed things to be done in the daylight hours that hustle, burn and disturb the senses in order to pay bills and distract one from concerns with the yawning abyss they are always three foot steps from falling into, the goal of all this commotion, procrastination and casual impatience with the way the city flows too slowly or accelerates time too nimbly is to sit at the table, muted night traffic, the refrigerator rattling and grinding with electricity waging war against the inevitable chill of frozen peas, to sit at the table and stare out the window, counting the lit windows in the windows you survey, smoke another cigarette, inhaling the sulfur deep til it burns the lung's deep, tender tissue, pen in hand, tip   of pen to notebook paper, a line    of words and then another, a pause to  refresh yourself, another drag of cigarette smoke, another line of words, two lines, one line  cut in half, someone is talking to someone not seen nor named, the night goes on, the windows of the  city burn bright and enternal u until   dawn and the first harbor boat blasts away every gull leaving their gifts on the pylons.