The depressed genius of The Lost Poets 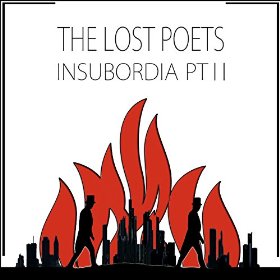 Depression is a art form, gloom is a high stakes gamble on a dour vision of the future, personal and collective, sadness and despair are the nerves of the human body on fire with every extreme expression of each otherwise contained emotion streaming like an electric current , from the base of the brain stem to the very most reaches of the gut. It is less a matter of being in a bad mood or being merely somewhat blue until the sun arises again in the morning; it is a statement of being in the odd, cold and emotionless real world that is as constant and proceeding ahead in its vaguely guided direction. It is that state of being when each of understands at last that our philosophies and certainty about the nature of Things are of no use when you're without friends or employment or a lover to make the world makes sense and that the existence we thought we could conquer with wit and good looks will not give us a reprieve to its ongoing purpose of just proceeding ahead and forcing circumstances on all of us.

Teenage angst, Nordic despair, existential crisis , call it what you will, but underbelly of the soul, that part of the self where it's always a sleepless 3AM, is an alluring quality, particularly in rock and  roll. Whether the speed freak  zen of the Velvet Underground, the post-apocalyptic ejaculations of Doors visionary Jim Morrison, or the more recent moody, mumbled and lumbering guitar gloom of Tool, it's a powerful stance for musicians and poetry -included lyricists. Distorted guitars, drumming and bass playing underpinning a bellowed and lower registers that struggles to climb to the top of the noise and , metaphorically, rise above the dark  for rays of an unobscured sun, this is the sound of the struggle to realize the pointlessness of trying to dream the world into perfection with abstraction and to change, to aspire for a life that is real, creative, authentic and vital to the attempt to change personal despair into passion. It is not a pretty picture, but when the self-pitying falls to the way side and the sound and words have impact as real, not mannered, it can be a beautifully thing . Damaged, loud, dented, demented, slightly insane, slightly broken,but real , human, beautiful all the same. 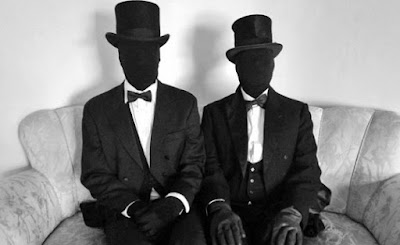 Damaged, grinding and tense are what the Lost Poets are, an anonymous duo from Sweden who bring us the mega-grunge behemoth Insubordia ll , an album of hard-scrabble guitar bashing, stalwart drums and tranced bass lines filtered and seasoned with ground glass. Not quite as anonymous as the legend they put forth, , the pair haven;t allowed their faces to be shown in publicity shots and names seem to be absent from the packaging, But atmospherics this grandly downbeat cannot go unacknowled, and we'll reveal the names as David Rosengren: (vocals, guitar),Petter Ossian Strömberg( drums, bass), production by Alex Holmberg, whose sound mix seems the audio equivalent of a Zack Snyder film, inspiring images on a massive steel-grey scale, nearly black and white.The interest in remaining unknown is intriguing and effective,as it enhances the grueling evocation of anomie  which is, to quote the Merriam-Webster online dictionary, "...  personal unrest, alienation, and uncertainty that comes from a lack of purpose or ideals." The album escalates the resonating chambers of rage and despair and conveys the soul wrestling with its demons night after sleepless night.

"Danny Electro" is the lumbering example of someone thrashing during a bad case of night terrors, beginning with a down-tuned acoustic guitar and pushed, nudged and badgered forward by unadorned drumwork, exploding suddenly with a visceral, invigorating crash of low slung electric guitar, a primal, metallic , blues-tinged caterwaul . This is similar to the abject despair of Cobain and Nirvana's anthem "Smells Like Teen Spirit", as the persistently coarse vocal harmonies and constant  strum and drone of acoustic guitars is what music has evolved at this point in the 21st century, rock, not roll, the rock suggesting weight, not mobility. The only motion this sound suggests is being pushed into the earth,the crush of empty history.

The effect is liberating despite the shoe-gazing and bedroom isolation atmospherics Insubordia ll offers up. I've listened to several times quite despite the gut feeling that music this depressed is contrived more a product of marketing decisions instead of the need to rid oneself of demons. This music is slow and deliberate, full of muted build up, choruses that are re-mindful of an off key church chorus intoning aprocraphyl Latin liturgies, lead singing alternately mumbled, as if emerging from self-medicated slumber and raging, howling, exposing the moment when the pain reaches its full expression and forces mind and nervous to demand relief from the grind. The wash of of distorted guitars, the sharp transitions between soft  to loud, was convincing, a corrosive evocation of the human condition where isolation seems the unchanging norm and the spiral descent seems an endless endurance.


This is the sound track of an industrial age when the machinery falls apart. This is the world where the unheeded youth of The Who's "My Generation"  realize that they need to rage harder, longer, bash the drum harder and grind the guitar sharper against the darkness that surrounds them. Insubordia ll isn't uplifting in the sense that it offers the greeting card salutations of hope and serenity, but it is compelling and exhilarating in an odd way as The Lost Poets wail, bray and scream against the  background of primal percussion and washes of marching chords and tell the audience that , yes,we hurt and we must make noise and get others to make noise as well and that perhaps if the sound is loud and mighty enough, the rock will roll over away from the caves we've sealed ourselves in and sunshine and fresher air and the noise of the world getting out of bed can greet us again. Not for the faint of personality, to be sure, but definitely for those who feel deeply and long, Insubordia ll is recommended.