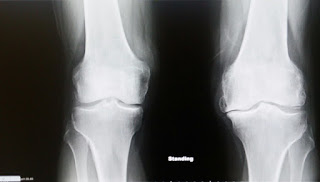 Total knee replacement surgery will be my fate in two weeks, and after that painkillers and, I'm promised, a vigorous rehabilitation regimen. As any person with a sliver of sanity would expect, I am dreading and looking forward to the procedure at the same time, an understandable ambivalence. First, I hate pain, I hate change, I don't like being in hospitals for anything. But I am looking forward to being able to walk without pain, something I've been doing since that time in 1965 when, on a dare, I jumped off a concrete trash incinerator attached to the back of Chippewa Drugs in the alley on a balmy summer day in Detroit. We were looking for trouble, moderate trouble, and looking for cool things people had thrown away, "we" being my brother Hollis, a weaselly friend named Casey, and a couple of others. I  climbed atop the incinerator to see if I could climb, somehow, onto the roof of the drug store, as I thought I could find footholds in various ledges abutting security barred windows.

None of that came to pass since I looked down and saw Hollis, Casey and the two others turned and run to the main street the alley was adjacent to."Jump, Burke" is what I heard Casey yell, and I did, a short distance to the ground , the cement , a distance I could jump and land properly for all along,and then spring back , ready for action in some imitation of a Batman recovering from a punch before delivering a star and moon inducing uppercut, but I landed wrong, I had slipped it seems to me know, I landed at the wrong angle and felt my left knee twist something horrible. The rest, they say, is a history I don't care to recollect in this brief sketch. I was able to walk to my house, a very long half-block trudge, but an hour later, after the adrenaline had worn off, I was in pain and made quite a bit of noise about it. Crying and whining I think is the correct description.

My Mom didn't look impressed with the pain I insisted was killing me, but we got in the car, went to the hospital and had an operation. Bear in mind this was 1965 and the procedure for torn ligaments in the knee was not as it is today; the cartilage  and such was completely removed , leaving me to recover with that joint being bone on bone. It's been like that for decades. I made due and accepted it as a younger man; running, dancing, climbing, and other sorts of activities that require me to stand for hours on end were matters I attended to without thought. Now, though , it's beyond the pale. The pain  is bad, and it's time to do something about while I have the means. I am grateful to have the means at this moment while this journey just gets more interesting by the day. It's an existence of uncertainty and cautious optimism. Being able to trudge that road without pain will be a wonderful, near-term result.
at October 29, 2015