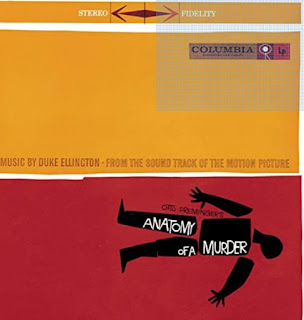 The reviewer at the All Music website opines that premiere genius Duke Ellington rose to the occasion when he had the chance to compose a total movie score for Otto Preminger's film "Anatomy of a Murder." This was not a case of saying that Ellington sustains his brilliance as a composer solely already established criteria, the implication that Ellington not just rose to the challenge of writing music for the moves, but showed himself to be the equal of forthcoming film composing giants, bumping shoulders with Bernard Herrmann and Alfred Newman. Insert your favorite composer and trust that the music Ellington wrote or laid around does not further the story.
What bothered me especially was the claim that Ellington composed his music that served the scene. It was discreet, unobtrusive, intuitively supportive of the narrative and the emotional dynamics under view. I disagree; I consider Ellington to be America's greatest musical gift to the world in the  20th Century and consider him an American Master of his art. The sound maestro doesn't seem to have had any idea of composing something that was meant to augment a filmed story. All the classic touches, color, impressionistic sweeps, and slyly insinuated improvisations are here--as an album, this is a fine work of ensemble concert jazz composition--but they don't just intrude on the scenes and sequences; they stomp on them. There is a struggle for attention.
The final effect is being in a crappy hotel room where the neighbors are playing the radio too loud for too long. It would be nice if this resourceful innovator could claim with pride that he had artistic success in the movies besides all the other forms he greeted and seduced into becoming his very own expression. Some shoulders remain could to the seduction. Remember that the name of his memoir is "Music is My Mistress." In the movies, Mistresses have minds of their own and will keep their own counsel.
at April 27, 2014