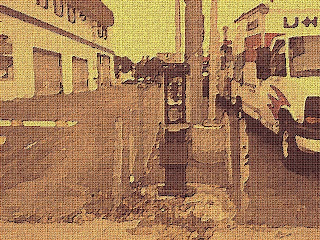 I agree that talent that does not "risk" something in the expression --the poet, above all else to be interesting and intriguing to an inquiring reader, must have the nerve to risk failure and have, as well, a casual attitude to the possibility that he or she might wind up being embarrassed--gives us mere professionalism. But too often the creed is risk for its own sake with a contemptuous dismissal of the idea of "talent" as being a cruel hoax perpetrated by a long-running gang of conservative, homophobic, racist, anti-woman punks; I understand and generally agree with the critique, but somewhere along the lines what used to be considered "risk-taking" turned into another gathering of stylistics which has woefully influenced a couple of generations of writers. I seem to remember that genuine risk taker, whether Burroughs, Artaud, Beckett, Joyce, Ginsberg, Stein, Joyce, had solid foundations in tradition; they had a knowledge of what they were transgressing, taking apart and reassembling.
They had that thing one calls "an ear" for the language they loved enough to master as writers and loved enough to goad it to forms that sharpened our collective wits with it in mind to see the world in new ways and so change it to something closer to the truth. Criticism, of course, judges how well these writers and others succeed or lapse eventually of their careers. History is not always kind: Kerouac was tone deaf, puffed up and pretentious in his rants, Ginsberg when from being genuinely inspired by visions and the legacy of Blake and Whitman and the Bible and became, in time, a mere self-chronicler, while Burrough's perversions, distortions, realignments, and genre-jumping fictions remain lively, fresh, funny and sinister, the definition of the Edge so many of us want to flirt with.
The point is that talent and risk, ie, experimentation, need to be reconnected in a meaningful way that can, perhaps, spare us from another generation of too -easily published poets who seem little more than children banging on pianos that have had the keys removed.I would agree with the general assessment of the risk/talent dynamic, but I would venture further and argue that we need to skeptical of anyone's say-so and disdain any set of world-shrinking absolutes. Cultural pontiffs--choice phrase, Ace--often enough start off as punks and wind up giving us revised histories of their salad day heroes by arguing at length that the music, the novels, the plays and the poetry they liked in college and early professional life didn't try to smash rules, break forms or set fire to the palace, but rather tried to return art and aesthetics to principles that have been dormant, abandoned, forgotten. Eloquent apologies for one's formative taste, though, does not constitute a defense of the starker, more brittle frameworks that have dissolved like so much sugar in the guise of avant guard impulse; I am all for risk taking and rule breaking, but even the nastiest, least comprehensible bodies of work created by suitably sociopathic experimenters there are things that catch your ear, your eye, your fancy as you read what's in front of you, there are measures of genius that find that one thing in experience, that issue that no one had engaged, that combination of forms, ideas and attitude that had yet to be combined that strikes you a get level as real genius.
I think these elements are genetic, organic, a hard to phrase dimension of human experience that transcends, easily, the problematics of social construction and canon makes. This is why I tend to support subjective or heroic criticism--the critic less a tastemaker than as someone who gathers their responses knee-jerk and reasoned both and conducts an inquiry to his own first-person criteria as to what constitutes failure or success in a frame, in a line, in a string of musical notes.

Email ThisBlogThis!Share to TwitterShare to FacebookShare to Pinterest
Labels: TALENT