The Comings and Goings of Every Tide 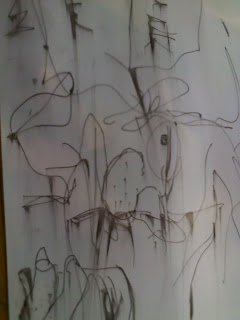 Oh, I had thought of getting my thesaurus a good dusting off and making some of you readers work for your clarity, but the truth is that I've nothing critical or insightful to say after two weeks with a summer cold that would not abate, beginning shortly after my simultaneous celebrations of age, my 61st birthday and my  26th year of sobriety, my mind is rusty, crusty and mushy all at once. What is thought of isn't fresh, quick or crisp, in any case, and a quite a bit of air let of the tire that is my metaphorical ego; what I would be a sweet rant or a rapid essay outlining the contradictions inherent in some insanely trivial pop cultural matter is instead just a murmur of words, a rattle of syllables before the   brain begins to shut down again, for the night, delving into the dreams of tinfoil nostalgia and the kind of dread only the snoring and inert can experience. In stead of the rant, here is bit of prose wandering, a poem maybe, or maybe not, but certainly a kind of writing the demonstrates the quality of this flu ravaged stew we bemusedly refer to as a mature mind and personality to boot. Hope you find something to appreciate.-tb
______________________________


THE COMINGS AND GOINGS OF EVERY TIDE

Picture if you will,  full lips wrapped around a pipe denying it's smoky plume,
Shredded dresses priced as high gear, the possibilities of  wide ties  and thick lapels
and belt buckles the size of home base coming together in an historical turn,
a sartorial demand.

It frightens me to think of these things, nervousness inhabits the veins the blood attempt to pulse through with something resembling a life. Better to be attending an elevated Mass, a refuge from in some hamlet where there are only phone books and want ads, admonishing the earth of slow down, to stay in place, to give a break on the gravity which costs nothing at all and costs us everything to defy as we ease ourselves between mountain ranges \and large bodies of water.

The whole thing sinks, against better judgment, my clenched and shaking fist, acres and acres of  prime land  boast the late bloom of architectural tyranny, coyotes, rodents, families  that have crossed the border seeking work flee the drying cement and are  crushed halfway across  the Interstate as police and

Television station helicopters chase one car full of guys who might or might]   not have done something someone a hundred years ago didn't like when the music
became too much like sex and men and women couldn't help but notice what there was to see beyond the archeology of clothes.  Meanwhile, meanwhile, in all the mean time
that never lightens up to what each hour means it's time for,  whole populations huddle in corners and vote amongst themselves for better dreams, visions from windows overlooking a coast line  where they can live with the comings and goings of every tide and slap of wave against  a white pier.