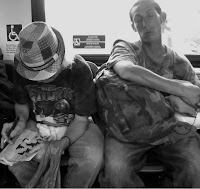 Plagiarism seems a sociopathic activity, like other forms of theft, petty and grand. The thief, due to whatever contorted world view, finely ratcheted system of rationalization and a dependable lack of conscious that they're doing any something wrong, will merely take someone else's writing and assign their name to it, no problem.

The only labor involved was the discovery of the writing that's about to be absconded , and whatever effort it took to cut and paste the material. What is especially aggravating isn't the big names that have been caught pilfering from other authors--Goodwin, Ambrose and Haley can at least fall back on laying the blame on harried research staffs--but rather t

I ran a poetry series for years in the seventies and eighties, where open readings were featured, and among the other poets, good, bad but definitely original in their work, where three regulars who read Dickens, Blake, Eliot, Marvel and Johnson , each of them claiming to have written the poems they just voiced. Others in attendance at these readings couldn't believe what they were witnessing, but no one said anything, fearing a fight or some such thing, until finally I cornered one guy, a forty year old, at the end of the last open reading I would MC. He'd just read a thick, awkward Canto by Pound, and I could see a dog eared copy of Ezra's poems crammed in his backpack. He taken the time to type out what he was appropriating , and introduced the poem as "the hardest thing I've ever composed..." I told him he has to stop taken credit for poems someone else composed. Not blinking, he stared at he, zipping his backpack shut, obscuring the Pound volume I conspicuously made note of. "Fuck, you man," he said,"language is free and genius isn't understood
in it's lifetime."

"Ezra Pound is dead for decades" I said,"and I still don't like him. But you gotta stop saying his stuff is yours."

He walked out, the cafe owner turned out the lights,  and I stopped hosting poetry series that night onward, and that is precisely the reason I'm still able to write and read poetry without losing a lung.
he thievery of the truly mediocre scribe who continually gets caught using other people's writing as his or her own, and yet continues to claim authorship for the work of others.
at July 18, 2013