On death and painting 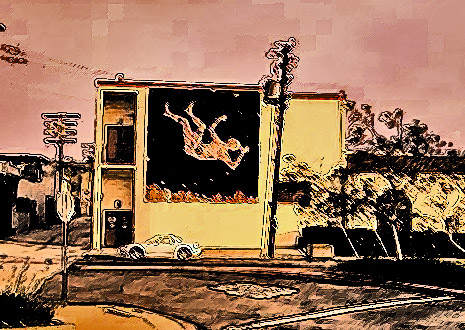 In the late Nineties I was involved in an online debate as to whether painting were a dead art , in view of the  then emerging new digital media which promised to give artists a new canvas, a new palette, a revolutionary way of creating art that hadn’t been done before. I harrumphed and pouted and tried to be sage in my remarks, but there wasn’t much of anything I could offer to the discussion other than this: Painting will be dead when artists stop painting and when art lovers stop desiring to look at the work of past, recent, and current artists. So far, there are no so-described symptoms of paintings' impending demise. In any case, what is with the impulse for some to declare entire mediums "dead", as if a literal body had been discovered somewhere, knife in back, bullet in brain, i.e., "the death of literature", "death of the subject", "death of the novel", "the death of the author", "the end of history", "jazz is dead”,” history is dead", "rock is dead", and so forth. I've read these declarations over the years, some with, some without arguments, some articulate, others ruthlessly abstruse, and save for a momentary rush of certainty that the many threads of history are suddenly woven together to the precise moment that the respective professors are making a case for, one realizes that the activities still go on in strength. Humans have a way of tending toward their business and their pleasures, in the ways that suit their needs and personalities, quite despite the cloudy forecasts of aesthetic morticians. There seems to be an easy habit-of-mind that wants to advance a more recent set of techniques, usually attendant on new technologies, only at the mortal sacrifice of older mediums. Co-existence seems a concept that makes a self-conscious avant-garde nervous. In any event, shall we say that there are things that can only be done with painting that nothing else, really, has come close to? Even if it did come close to achieving the effects, good oil or watercolor can, what makes the new medium anything other than an advanced species of clip-art and simulation.   The body count, I think, is greatly exaggerated. Devalued, no, if the aim of new art is to re-create, faithfully, effects produced by painters.

Sadly, this seems to be the only motivation behind many competently technologized artists whose work is often little more, really, than the reproduction of painterly effects. I'm willing to think these new medium artists are still wood shedding and experimenting with what they can do with their "new canvas" and "new palette", but it's plain that many have yet to make Real Work. We have fascinating results that have an inescapable crisis of its own, an utter soullessness coming from any intrinsic lack of character apart from the shiny, show room sheen of simulacra. Clip art is the result, I believe, if that is the only impulse motivating the particular artist. Newer methods can indeed co-exist with older--it's all around us--when artists drop the show-offish instinct of duplication and instead reconcile themselves to the limits as well as the advantages of their particular form. The crisis, I think, festers on the other end. The death of painting not withstanding, it seems that painters long ago accepted the terms and strictures of their chosen craft, and are in a long and envious history that they can play with at will, add to, diminish, broaden, contract, what have you. No painter I know feel crunched or sickly because of the imagined malaise --human need to express itself perseveres and is acted upon whatever revisionist rhetorical brackets are set around them, trying to diminish their worth, relevance, or health. The death or crisis of their art is meaningless to the working artist. The announcements that arts or particular mediums are "dead" or in "crisis" are melodramatic inventions that comes from bad, over generalized criticism that's in a hurry. It's better to get on with the honest work of art making, and focus commentary on the interaction between art styles and periods. Technologized, digital art is the art that is having the crisis, if anything: a personality crisis and one wonders what his new art wants to be when it grows up. This is a real question: what is "real work?"  Work that artists manage to do that's unmindful of having to illustrate a critics' or a harried art historians' criteria. What that evidence is endlessly subjective, and will vary artist to artist, medium to medium, but it will be the work, I think, that seems the most self contained, mature, and complete, with all influences assimilated and artists experiences and personality full enough to inject an individual intelligence into the work. It will be the work that utters precisely the ideas the artist has about ways of seeing. It is art that works as art, not demonstrations of yet another manifesto. We're talking about professional adult artists here, not small children or plants that need tending. What makes a form of art- making grow are artists who dedicate themselves to their process, their work, and who focus their energy on how the medium they've selected for themselves. A healthy self-criticism probably doesn't hurt the production of new work either, as with the notable artists who can tell the difference between pandering to an imagined niche market, or a specialized audience that inoculates the work from honest appraisal, and the real work that is made quite apart from anyone's expectations or demands, except those of the artist. Good art-making is a rigorous activity, playful as it is, in whatever mode one operates out of. Everything else seems to take of itself if the art is good, worth being noticed. One advances into a their art with no real concern about making history--their obvious concerns are about making their art, with some idea of what it is they're advancing toward, and what past forms are being modified and moved away from. But the judgment of history--as if History, capital H, were a bearded panel viewing a swimsuit competition--will be delivered piecemeal, over the years, after most of us are dead, and our issues and concerns and agendas are fine dust somewhere. The artist, meantime, concentrates on the work, working as though outside history, creating through some compulsion and irrational belief that the deferred import of the work will be delivered to an audience someday, somehow. That is an act of faith, by definition. The artist, painter or otherwise, also casts their strokes, with brush or mallet, with the not-so-buried-dread of the possibility that that the work will remain unknown, shoved in the closet, lost in the attic, and they will be better known for their day job rather than their manipulation of forms through a rarefied medium. Less that democracies are anti-artistic than they are resistant to the notion that aesthetic concerns and artistic expression are reserved for a cultivated elite.  Democracy rejects this sublimated priesthood on principle, and opens the arena, the galleries so that more who wish to do so may engage in the intuitive/artistic process and keep the activity alive in ways that are new and precisely relevant to the time--this is the only way that the past has any use at all, as it informs the present day activity, and allows itself to be molded to new sets of experiences. Art is about opening up perspectives, not closing them down, and that is the democratic spirit at its best. Otherwise, the past is a rigoured religion, and history is an excuse for brutal, death wish nostalgia. History, for that matter, is not some intelligence that has any idea of what it's going prefer in the long run--the best I can offer is that history is news that stays news, to paraphrase a poet, which implies that the painter who survives the tides and eddies of tastes and fashion and fads will the one whose work has an internalized dynamic that is felt long after the brush is dropped and the breathing stopped.