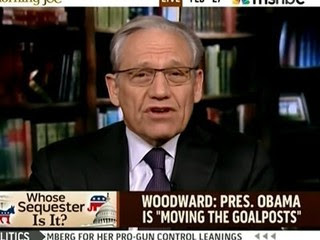 It was suspicious enough when journalist-author Bob Woodward inferred that an email exchange he had with a highly placed White House representative was a veiled threat against him. Did anyone believe that a Presidential staff as media savvy as the one Obama has working for him would consider even on their worst day that threatening a celebrity political reporter was even remotely a good idea? It turns out , we learn , that Woodward, who of late has be absorbed into the alternate reality known as Fox News, mis-characterized the correspondence. If that wasn't pathetic enough, Woodward took the Fox  air again to defend is original remarks about the digital digression.      He has the look of someone caught  telling a lie, a self-inflicted wound to the reputation to someone who curried favor with presidents, Supreme Court justices, Generals and other power players.

Beyond his ability to get interviews with the most powerful people in Washington and then write best selling books about them, Bob Woodward has struck me as a glorified ambulance chaser, an eavesdropper, a gossip hound only a screen door removed from the stench. In an another life he would be hosting a TMZ variant. In an digital era when information is available immediately to anyone who seeks it and when news breaks faster than we're able to blink, Woodward, a creature of newspaper culture and the author of  books that attempted to give broader context to complex personalities, must have felt his relevance fading rapidly,badly. I can only think that appearing on  Sean Hannity's show was a way for him to stay in the game and remain in the current discussion.

The problem, though, is that his awkward attempts to give his email exchange with his White House contact a "Fox' spin only made him a story , separate from any real journalism and perspective he might have provided. The White House release of the emails after Woodward's characterization of them as somehow menacing --they sound anything but--just makes this once highly considered writer seem like another old , tired warhorse subjecting himself to the buffoonery that is the stock-in-trade of Fox News. It is a pathetic spectacle.
at March 01, 2013