Nothing in the store was over five dollars 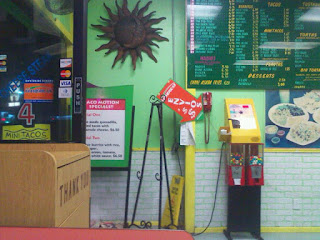 Nothing in the store was over five dollars , so Brake thought nothing of it to get a bag of cell phone cases for a sweet deal of a buck and a quarter. He gave the cashier a five, pocketed his change as he released a satisfied snort , and walked out of the store.

Then he remembered he was still in Clairemont, at an intersection that had chain coffee shop, an adult continuation school and Church full of garble tongued snake handlers on the other three corners. Just beyond a grove of dead crab apple trees he could see the High School Science building roof, a bleak and dreary twp story slab of flyweight construction from which the American flag was seen caught tangled in the chain and pullies of the flag pole.

The flag wrapped around the pole as the wind made sharp corner of the item flap listlessly like an animal caught in a trap who's reflexes spasmodically twitched and pulled against the inescapable of the steel tooth device. Brake thought of Thanksgiving dinner and dropped his bag of cell phone cases, remembering he had no cell phone and no phone number either.
at December 02, 2012